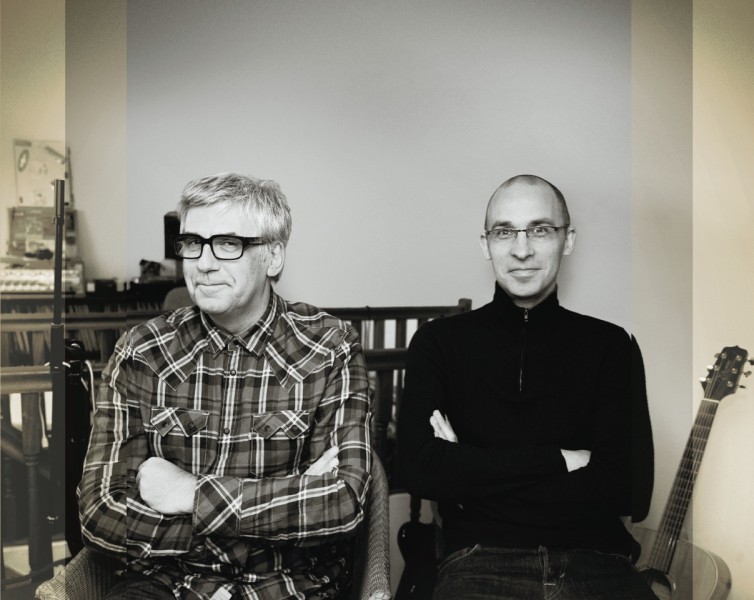 The latest episode of the When We Dip podcast is here and we’re honoured to welcome an act which has played a big part in sculpting the shape of the electronic scene in Ireland.

Shane Johnson and Greg Dowling AKA Fish Go Deep are two of the truest musical pioneers on this green isle, last year celebrating a whopping twenty five years spinning the best in soulful, groove-filled House Music. The pair have impressed year on year with top quality releases on the likes of Defected Records, Innervisions and their very own Go Deep Recordings.

With new music forthcoming on Atjazz Music Company, Local Talk and more, 2015 looks set to be yet another big year for Fish Go Deep. We caught with Shane this week to find out what they’ve been upto and what the next few months have in store. So hit that play button and enjoy!

WWD : How are things guys ? What has the schedule been like this week?

We were back in the studio after a short break, working on some new music for a couple of vocalists. And at the weekend we played at a fundraiser for Yes Equality here in Cork. Great cause and a great party.

WWD : You celebrated 25 years in the business last year, a serious landmark! Can you tell us a bit about your current direction?

As DJs, it’s always been a case of simply digging out the best new music we can find during the week and serving it up to people on the radio or dancefloors at the weekend. Still works!
In the studio, we’re definitely more focused than we have been in the past. Sometimes it’s great to just switch on all the gear and jam out some music and other times it’s more productive to think and talk about where we want tracks or projects to go first. Some of our best results recently have come out of a mixture of the two approaches.

WWD : Are there an specific goals you’re still hoping to achieve? Any parties you’d love to play?

As producers we want to get our music out to as many people as possible so that’s an ongoing goal. It’s easier to release music these days but probably harder to get it heard so the challenge is not only to write and record good material but to keep up with changes in how the music is distributed to people.
As DJs we’ve travelled to a lot of places over the years but there are still plenty of countries and clubs we’d love to get to. We’ve always had a strong residency here in Cork, from our weekly club in Sir Henry’s in the 90s right up to our monthly parties today and maintaining that connection at home is important to us too.

WWD : You guys started spinning in the mid to late eighties, back when records were much harder to get a hold of. Nowadays, producing and buying records has become a much more simple affair. What do you make of the current situation?

There’s a lot more noise to cut through nowadays but great music is still out there. It probably takes more time to sift through all to the various sources than it did when we first started but that’s part of the job of a DJ.

WWD : You’ve spoken about how you used to get records posted over from Manchester. Can you tell us about some of the gems they passed on?

Greg’s connection in the Manchester record shop, Spinn Inn, also used to supply Mike Pickering at the Hacienda. So a lot of the early US house imports that were breaking big on the most important dancefloor in the UK would also make their way over to Cork at the same time. Releases on Chicago labels like Trax and DJ International, New York’s Big Beat and Nugroove, KMS and Transmat in Detroit. This stream of amazing new music had a huge influence on our early sound.

WWD : The residency in Sir Henry’s spanned a whopping 13 years, any memories that will stay with you forever?

Matthew Herbert on stage in a dinner jacket sampling nails in a Maxwell House jar was certainly memorable. Boo Williams and Glenn Underground rocking The Clash at a late night afterparty on one of the Sir Henry’s Weekenders. Joe Claussell melting a few minds with The End by The Doors. Kerri Chandler, Jerome Sydenham and Arnold Jarvis performing for what seemed like an entire weekend – the after-after-after party. There are loads more individual nights that stand out but the abiding memory of the place is of all those regular Saturdays – just the two of us on the decks – where the hardcore Cork crowd would be out in force to get their dance on.

WWD : Back then you had the time to mould tastes playing week to week. These days with the influx of internationals flying in for one night/two hours only, do you think the scene suffers from the absence of a relationship?

Definitely. A healthy scene needs strong residencies – clubs and DJs that have an individual and distinctive sound of their own. Over the years there were so many obscure and sometimes odd little tracks that became huge records for us because we had the time and space to break them at our weekly party. There’s less of that time and space these days and scenes suffer for it. The bigger club and festival line-ups around Europe can have a very samey look to them.

WWD : Is there a lack of patience in the current environment?

The parties we play regularly are receptive and will give a DJ time to build a set but when you guest somewhere for the first time, it can take a while for people to get used to your sound. In these situations, we find that if you bombard them with a bunch of big tunes from the off, it generally doesn’t work out so it requires a bit of patience from both the crowd and the DJ. A good club is about the crowd as much as the DJ.
WWD : You’ve cited Mike Pickering & Graeme Park of the Hacienda as two of your great influences but we’d love to know who are the guys right now doing it for you? Anyone from down South?

We haven’t been putting on guest DJs in recent years so haven’t really seen too many of our favourites playing lately. On the production side, we’re digging the loose, funky vibe of guys like Nachtbraker and Glenn Astro. And Opolopo has been on fire with his remixes recently.

WWD : On the production front, can you give us a little insight into whats going on?

We have various productions and remixes coming out on Atjazz Music Company, Local Talk, Republik’s new label and a few others. We’re in the early stages of setting up a live electronic project with Andrew Phillpott called Squares. And we’re also recording with some new vocalists so there should be a bunch of songs coming out of that. Busy!

WWD : Before we sign off what are the big dates on the horizon that we should be aware of?

We’ve had a great run of nights at our residency in The Library in Cork this year and we’re getting set for the next one on May 3rd.