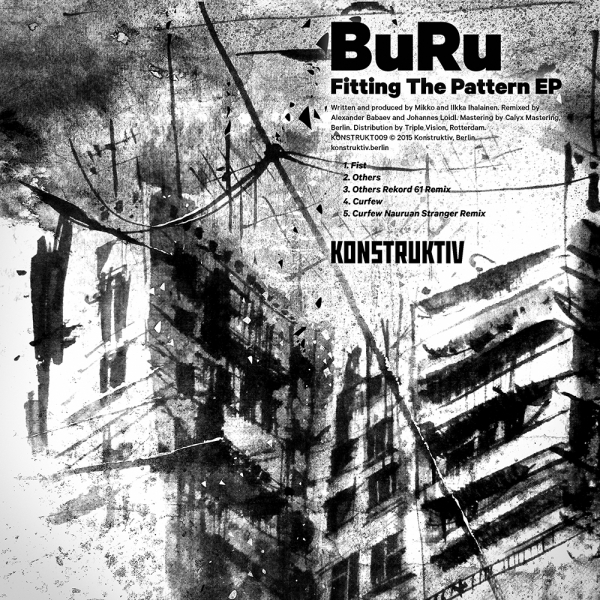 Although they grew up on an eclectic diet of pop, progressive, trance and house, it’s in the techno domain where Mikko and Ilkka have really flourished. The Finnish brothers have been making music together for some time and though it’s taken them a while to find their niche, they’re most definitely now indebted to harder-edged sounds.

The production style of BuRU really comes to the fore on their latest release for the Berlin-based Konstruktiv label, showcasing their sounds to a whole new audience in the process. All things just, they’re sure to discover a whole new plethora of fans thanks to the EP. We checked in with them recently to find out what’s what in their world while they also treated us to a full premiere of “Others”.

WWD : How are you guys then? What have you been up to?

Mikko: I am fine thank you, feeling a little lazy at the moment. I’m setting my mind back to normal after a quite busy MayDay party last night. A very good time to give an interview!

Ilkka: I am good, I just came back home from work. I had a very productive weekend musically, so I’m feeling quite happy about that.

WWD : What was your first introduction to electronic music? Why did it really appeal?

Mikko: I think my first introduction to electronic music was during my childhood, when I was trying to catch Depeche Mode and 2 Unlimited tracks from the radio with my cassette recorder. But I really started to live it when I experienced my first rave experiences in the late 90s. Raves can change a person and you can get hooked easily, and that’s pretty much what happened with me. Back then I was listening to trance and house, but I began creating my own tunes too.

Ilkka: I think my first introduction to electronic music must have come from Mikko. He is my older brother, so he has influenced me quite a lot and introduced a lot of music to me when I was just a little kid. But the first time when I got really excited about electronic music was when I was still in elementary school and I bought Apollo 440’s album ‘Electro glide in blue’ during a class field trip back in 1997.

WWD : How would you describe your style to someone who’s yet to encounter your music?

Mikko: I would say that BuRu has a personal and versatile techno sound. If you like hard edged rhythms with minimalistic and sometimes experimental groove, you´ll get on well with our sound.

Ilkka: Minimalistic techno with an experimental flavour. There are deep, repetitive and hypnotic grooves, but sometimes there are playful structures too.

WWD : What is it about techno that you love so much? Does the weather and the landscape in Finland suit in terms of making techno?

Mikko: I love the fact that in techno less is more. Like Jori Hulkkonen once said: “ In techno anything can happen, but there rarely happens anything at all.” The primitive rhythm with percussive elements is often enough to take the listener off this world. Techno provides a very good foundation for experimenting and at the same time interacting with audience.

And yes, Finland´s cold, dark and the long winters help you to spend longer periods in studio. Finnish nature is also a source of inspiration for me.

Ilkka: I love techno for its dark, simple aesthetics and deep vibes. I think that as a genre, techno is quite forward thinking, but still at the same time, it stays very stagnant and as a consequence it reaches the very roots of music through hypnotic repetitiveness, which shamans and voodoo witches used (and are still using) on their rituals. I think that the expressionless aspect of techno mirrors the Finnish mentality perfectly. And it’s always a good thing when you get people to dance together on these latitudes.

WWD : From that point of view, who really influenced you when you were starting out? And who continues to?

Mikko: In the beginning, I always wanted to make tunes like The Chemical Brothers (failed every time). Producers like Sasha and John Digweed and all those progressive house era legends were very influential too. Later when we started producing as BuRu, we made more eclectic and bass-influenced stuff and were listening lots of Om Unit and Scuba. Nowadays I really appreciate Truncate, Function, Inigo Kennedy, Perc and Samuli Kemppi.

Ilkka: At the very beginning I was really fascinated with electro and bigbeat artists like Fatboy Slim, Basement Jaxx, Felix da Housecat, Justice and the like. Also The Chemical Brothers, Underworld and Apollo 440 have always been there to inspire me. I still like all those artists, but nowadays all the inspiration to making music comes from such techno artists like Inigo Kennedy, Dadub, Sigha, Rådhåd and all the other active techno and dubtechno names.

WWD : So do you come from a musical family?

Mikko: Actually our family was very unmusical, so it has to be some hidden gene that made us become interested in music. I wanted to learn to play bass in the neo-punk era in the mid-nineties. Every dude had to have his own punk band then in Finland, but that didn´t last very long…Later on I wanted to learn to produce electronic music.

Ilkka: I also started with the bass, but in my case, it lasted a little longer and I played the bass actively from elementary school to the recent past; it has been about three years now when the latest rock band I played in broke up. After that I really started to concentrate on BuRu and producing techno music. I actually sold my bass guitar a couple of days ago to make some space for new toys.

WWD : How long have you two been DJing and producing now? What’s the single most important thing you’ve learnt from that time?

Mikko: We started as producers together about 10 years ago, but as BuRu we have been together since 2010. DJing came later, we did our first DJ gig 2013. DJing really supports producing, you learn to understand what kind of tunes you want to create and the track structures become more dynamic. You have to know how tracks work at the clubs. Producing-wise I´ve learned that you´ll never become ready, there is always something new to learn and the need for new toys is endless.

Ilkka: I think the most important thing I have learned is that there’s never quite enough time to do all the things you would want to do and get all the ideas from your head to actually sound like music. So at some point you really have to decide what you want to do and which kind of music you want to really concentrate on. When you get yourself to that point, things get much easier.

WWD : At what stage did you realise you’d very similar tastes then?

Mikko: As brothers we have constantly shared our musical experiences and introduced new interesting music to each other. We have liked the same kind of bands and genres since childhood.

Ilkka: In addition to that, I would say that we have been developing our musical tastes together.

WWD : So how does it work in the studio with you two then? Who does what?

Mikko: Our workflow goes like this: we make raw beginnings of tracks independently at our own separate home studios and when we get together we continue from there and finish them together. That has been a very productive and efficient way of making music. When mixing tracks, one of us uses the computer and the other one listens in the back of the studio and gives feedback of how it is going. We have a very coequal relationship in the studio, both can do their magic equally. Sometimes when we have more studio time together, it is nice to jam tracks from start to finish and move on from those recordings. In such cases, Ilkka uses, for example, the Analog 4 and Akai Rhythm Wolf and I use the TR-8 and Maschine + some synths.

Ilkka: Usually when we are making a track together from the scratch, Mikko will do all the beats and drum-like parts of the track and I will concentrate on the synth, bass and pad type of sounds and instruments. That’s not a fixed formula though, but from some reason it is the way we usually start to jam.

WWD : And what are your studio days like? How do they differ from day-to-day?

Mikko: As I said before, if we have lots of time then they are full of jamming together. It really depends on what kind of project is going on. If we are preparing a new release, then we have to concentrate more on certain tracks and mixing them.

Ilkka: And some days when we are not sure what we should do next, we start to listen to all the recent projects and try to sketch a big picture of where our sound is going to. It helps us to decide on which projects we should work with next. Listening is a very important act in producing music.

WWD : So are you pretty prolific in the studio? Do you work on a lot of different things at the same time or generally just try and get one track done asap?

Mikko: If there is a certain goal. like a new EP coming out, it is time to concentrate only on those tracks. But in “the free mode” we might work on a lot of tracks and follow our intuition on which track needs more attention at that moment.

Ilkka: When producing together, we try to be as prolific as we can and work effectively on just a couple of tracks during a session.

WWD : And what was Finland like as a place to grow up for electronic music? I believe the closing times don’t really help matters?

Mikko: Finland has had an electronic music scene for quite a long time. First warehouse-parties were held during the late eighties. Nowadays the scene has many promoters and different groups & sound systems. We have lots of underground parties, which really don´t have any closing times, so it has never been an issue.

Ilkka: There is a lot going on in the Finnish electronic scene nowadays, but when I was a teenager and a young adult, there was this black era of psy-trance and hard house. That wasn’t really my thing. Luckily things are very different today.

WWD : Your new EP is on Konstruktiv. How did it come about? Have you been following the label for some time?

Mikko: We tried to go on a fishing expedition and sent our demo to Konstruktiv and that worked,  as they quickly wrote back with a positive answer. In addition, Konstruktiv wanted to add two remixes for the EP and was ready to invest on promotion and quality mastering at Calyx. That was a very good offer for us.  I had heard Radio Slave´s remix of  Rekord 61: Sverh before and I thought that the label had a very promising sound. Konstruktiv is quite a new label, so no, I hadn’t followed it for long before.

Ilkka: Co-operation with Konstruktiv has been very rewarding and educational, and I’ve even learned some new tricks from Ableton Live when they asked us to send our project files for remixing. It’s always a good sign when you learn something new!