Lakerama: Talking style, sound, and the challenges of teamwork with the rising Irish duo

With their new EP dropping today, we caught up with Cork/Limerick based duo Lakerama to find out more about how they formed their image and their eclectic style. They let us in on the details of their new tracks, how they create their own sound and what’s coming up next…

For those not familiar with your story, let’s first look at how you guys got started. Where did you meet Graeme?

Senita: I’m going to let Graeme take the reigns on the story here…

Graeme: After years of producing music on my own I wanted to challenge myself and start working with vocalist. I heard Senita on Daithí’s track, ‘Golden Blush’. I really liked the power in Senita’s voice, it’s hard to find someone with that tone and quality. I contacted Senita via Facebook and explained what I wanted to achieve musically. It was a bit of a risk for both of us as Senita was Cork based and I lived in Limerick so there was a reasonable commitment involved but it’s over two years later and we are still making music.

You’re currently also a member of Cork-based R&B group Shookrah, how was it dealing with the change from a live band to working with Graeme as part of Lakerama?

S: It has been an interesting transition but also quite a natural one. With Shookrah the steps to creating our own music were more tentative, as we’re all friends and worked with each other on the premise that we admired our respective talent and music tastes but it took time to be original and make it work. With Graeme’s directed invitation to work on a couple of tracks, I was working to a similar dynamic to other side projects I’d experimented with but I was centre stage of the themes and the subject performing. There wasn’t the security of an established friendship to ease the work flow but of one of intent and exploration, and I think that getting to know each other in our creative modes has created a great amount of respect for one another that has forged a friendship. In saying that, we are still figuring it out, this last EP has had more time and communication with one another as to what we wanted to say in the EP, and how we want it to sound- but its like rapid fire. We get shit done pretty quickly, which is great because we can just keep building our repertoire and revising it to make sure its what we want. You guys come from widely different backgrounds, how do you go about moulding them together in your music?

S: I do a lot of listening to music of varying backgrounds and genres- I listen to a lot of vocal/production stuff when working on things of a similar nature. But I am a jazz/ r&b girl at the core, and that is where my voice is most comfortable but in assimilating a wide variety of music you expand the horizons. I have also had the great fortune of working with other Irish household names like Daithí, Ian Ring, BANTUM and Le Galaxie- who are diverse in what they bring to electronic/pop music, so this has influenced how I structure songs with Lakerama, what the accompaniment needs; a hook or a power ballad style vocal. Often I’ll come up with a line and Graeme will play around with ad libs and harmonies around it to create texture, I have to learn to be open with how he interprets anything and plays around with it- I think he has the same openness to my suggestions as well.

G: I think with the first music we put out, our sound was more pop based. It had darker elements but with ‘Contactless’ we wanted to expand on these darker themes both lyrically and sonically.  I grew up listening to UK Garage, Grime, Jungle and labels like Ninja Tune and Soul Jazz were really influencial on my early productions. I wanted to incorporate this sound palette into Lakerama along with Senita’s influences and suggestions. It’s really challenging to knit it altogether and make something that’s cohesive. It would be so easy to throw Senita’s voice over a generic house track but I think we both want to create music that challenges traditional trends.

Your new EP, Contactless, has some pretty eye-catching artwork. How does your artwork and imagery reflect your music style? Where do you take your influence from?

S: Thanks, we love it as well! Imagery and style have always played a core role in anything I do really, there is a suggestion of ideology/ philosophy/ spirituality in how you present yourself, your surroundings and work and I like to play with that. The artwork for Contactless EP while created without any directed pointers really evokes the essence of some of the ideas we were trying to develop in the music. There is a lot of sparseness there, which really gives way for you to focus on the striking deer and colours going through it. Deer are widely accepted as being symbolic of gentleness and softness; a messenger, a shaman; maize and femininity personified- but the ep’s message is in discord with this idea. The EP is a personal document on the different distances that I have experienced or created coming out of a weird year that reflects how distorted everyone’s sense of reality and humanity is. These are explored in terms of romance, personal growth and conscious humanity – so there’s a juxtaposition going on here. We’re rounding up production for our upcoming music video, which employs contemporary dance in a beautiful but dissonant way as well- I am fickle, anything beautiful can imprint on my soul for a moment, but I also enjoy the beauty in disruption- what point is it making, how does it effect me. I think there has been a greater opening for concept driven music to be revisited with artists like Solange, Frank Ocean, Blood Orange and The Blaze. They all parade strong, thematic visual concepts- so we are taking our queues from who we admire and working on our own version of this.

G:  One of the resonating themes of  ‘Contactless’ is our relationship with technology and how that can alter our perspective and desensitise us to reality. The deer should act as an anti-thesis to this but because we are viewing it through technology it’s impossible to distinguish between the organic and technological aspects, what is the real and what isn’t? 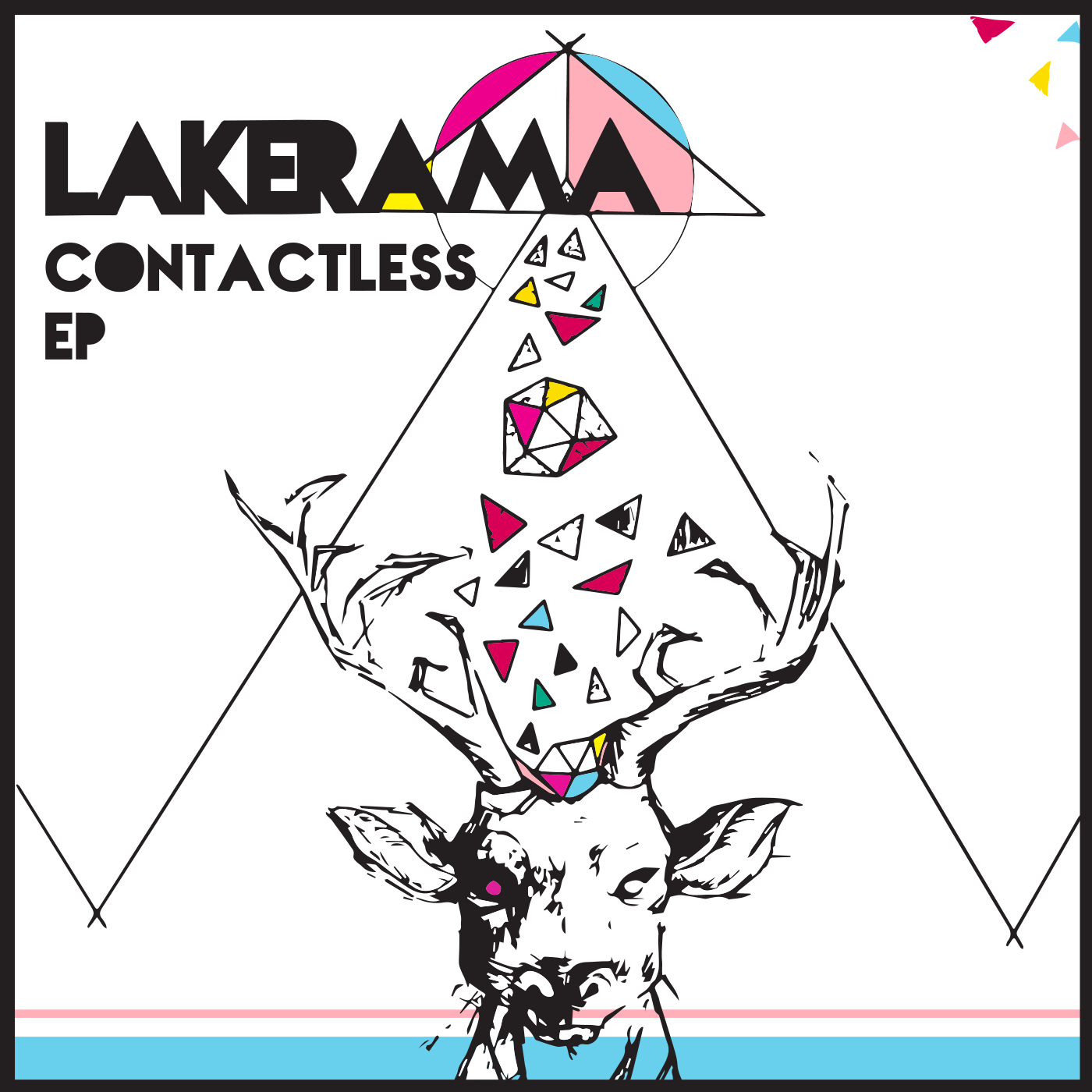 You two don’t shy away from bright colours and big patterns and you both have a distinctive style. Where do you pick up your best threads?

S: I am good for playing around with vintage purchases alongside high street. My frequent stop by would be: Tola Vintage Store ( Dublin, Temple Bar), Asos.com/marketplace, H&M and Mercury Goes Retrograde ( vintage- Cork, Opera Lane).

Next month, we’ll see the release of your next music video. You spoke to us about the importance of visuals and live art in your work, will we be getting a taste of this in the video?

S: Definitely! The music video will be a three piece video concept, which goes into some introspective feelings of trying to self actualise yourself out of a negative place. I came up with a pretty thorough storyboard in which Graeme and I are framed in the ordinary world, two people desensitised to their innate want to create and what happens when they encounter their alternate selves who have proactively chased their artistic calling. I worked with two amazing dancers/circuc choreographer Maria Sinnicker and Gracie Marshall, who really gave themselves to the idea and Brian Kiely, a great video-grapher / director who was patient with what we were hoping to go for. Again space, elegance in apparel and movement is toyed with but then there are troubled moments, which tie in with the music.

Your new release features a perfectly balanced equation of electronic beats and powerful vocals. What’s your favourite track on the EP? Ours is “Walk”

S: That is awesome to hear, ” Walk” is delicate and lovely, I love it as well. I must say while I am proud of all of them, I am looking forward to ” Just Enjoy Yourself”, its a poppy one, its a little sullen in places and the video edit we have for the music video is really cool and fun. I particularly like it because it came together last minute and was almost not going to be on the EP but it is actually the glue to a lot of the themes but is angled a bit lighter, its a release.

G:  “We Don’t Even Matter” is one of my favourites. I really stripped back on the production elements, it’s just a simple melody, a bass and kick with some minor elements. Senita’s vocals are really powerful on this track but there’s a tenderness to them that I feel comes through.

The tracks look at communication and human connection, and how the smartphone era is working against us. Where do you go to disconnect from technology and chill out?

S: Cork city is a pretty and industrial city, so if I am taking some air I’ll either go for a walk out the Lee fields ( its basically a sweet suburban walk alongside the city leading out to fields and parks. Some friends and I might go there for a swim when its warm, or else we’ll go for a walk and a smoke out by the docks. Both are entry points for Cork city.

We’ve got lots of info on you Senita, so give us a fun fact about Graeme.

S: He once pronounced WeTransfer as Wet Transfer, which is a semi-plausible mistake and rude of me to bring up given I am always trying to get away with words in the wrong context- but it really just sounded like he sent me excrement when he said in words. It was a pretty funny moment.

What three tracks are dominating your headphones right now?

And finally, we’ve seen Lakerama supporting big names like Princess Nokia and Taylor McFerrin, (as well as collabs with Le Galaxie, Bantum and Daithí), where will we find you gigging this summer?

S: We are looking towards some festivals for the summer that will be announced and we are very much keen to get the next body of work started, so it’s all good things.

Check out their new EP “Contactless” on Spotify.