This week WWD caught up with the No Kissin’ Ensemble ahead of their upcoming performance at the Imagine Arts Festival in Waterford. This Cork based theatre group are returning the stage after their run at this year’s Dublin Fringe Festival. Their show, SLSD, takes audiences on the night of their lives in just under 60 minutes. We asked company member, Hanan and the show’s musical composer Conor, to let us in on the secrets of SLSD and provide us with a mixtape of some of their favourite tunes.

WWD: What’s up guys? Thanks for catching up with us! First off, who are the No Kissin’ kids? How did you meet? And who came up with that all important company name?

H: So. Daithí, Aidan and I met in college while we studied drama in UCC. We started creating and making theatre in a really collaborative way in our final year and I think the form really suited us. We graduated and that summer started the company. I distinctly remember sitting in my college gaff. Jenny, Jamie and Kate are our other 3 company kids and we open up to specific collaborators like Conor on a project to project basis. Now, the name… We were all working with our girlfriends at the time and we made it clear – ‘No kissing’ in rehearsal!

WWD: So professional! Your new show SLSD was featured at this year’s Dublin Fringe Festival. Do you want to give us a snapshot of what it’s about?

H: SLSD is a fictional underground club and the audience are invited in for one night. The story of the scene, the sound and the venue is told through the lens of six regular ravers. They interact with the audience and give them a sense of what it feels like to spend one night and every night after that at SLSD. 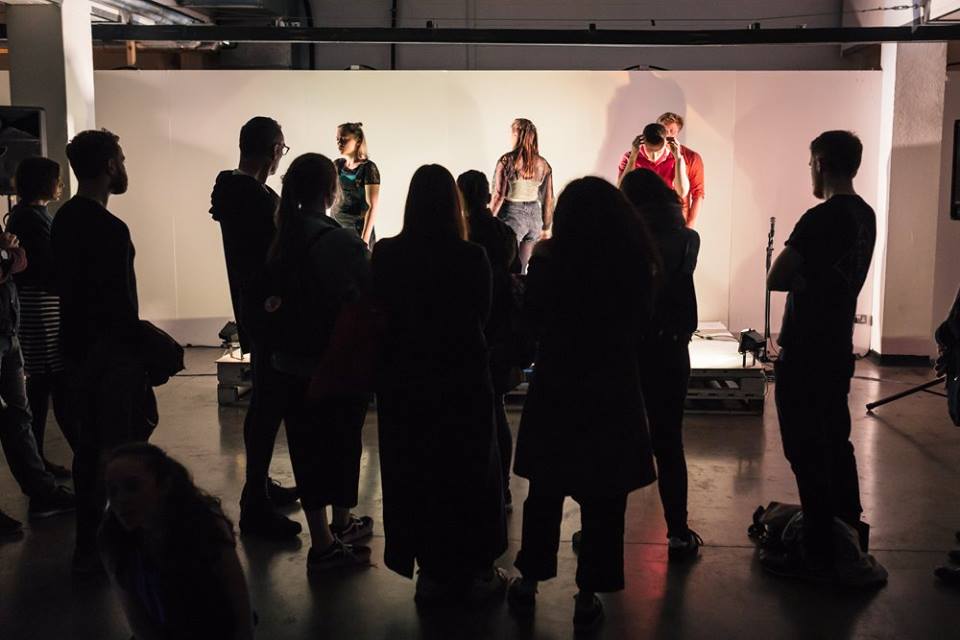 WWD: So the show provides a glimpse into the ups and downs of modern club culture. Is a certain statement trying to be made? Or is it just a good time?

H: Party! No, but really it’s about the feeling. The feeling of it now. The feeling of raving across time. The feeling of being part of a sub-culture where you’ve found a sense of belonging. The viseral feeling of the highs, your most memorable night. The rawness of the lows. Falling deeper into delusion. For me theatre is all about perspective and so we’re trying to look as 360 as possible.

WWD: When describing the show you guys say, ‘’the individual lost and a movement found. SLSD’s story is told from inside its walls by the people entranced by its allure.’’ There are certain elements of house music and nightclub culture that can bring people together, and other parts that can isolate them. Is SLSD a comment on this kind of experience?

C: For sure. While I definitely agree and I think the show touches on elements of the isolation that can happen, I think that the overall sentiment that the show tries to convey is a feeling of solidarity. It’s the feeling of being part of something, a movement that seems both exclusive and ephemeral, like it’s got kind of a sense of secrecy as well as a fleeting feeling. The show is less of a comment and more of a showcase of this overwhelming feeling you get from being part of a beautiful, transient moment that totally encapsulates your youth and wraps you up in a sort of nostalgia for a time you haven’t even lived through yet.

WWD: You mention certain influences for SLSD on your blog, including the New York club scene of the 80s and the growth of the rave scene in the mid 90s, but as a group of young college students, is there a certain portion of it that is autobiographical?

H: It’s hard to say yes and hard to say no. Yes, I’ve lived some of the scenarios which are shown but they might be presented abstractly. There’s intentionally a vacancy of plot for a number of reasons. One of which is that I feel your experience of these parties are fragmented.

I believe real parties are a different world. Chaos. I’ve personally spent time partying in college, as most have, and at music and arts festivals. I feel those parties and moments had a really huge influence on who I am now. Those parties teach you how you deal with yourself. They shape you for better or for worse and I think everyone feels that. So it’s hard to say autobiographical when it’s everyones story.

WWD: Conor, you composed the score for the play, how did you go about it? What can we expect when we go and see the show?

C: To be honest, it was a huge amount of trial and error. I had never written any electronic music before Hanan asked me to do this, so I had no software and not much knowledge about the genre or how to make it, but I was excited at the idea of it so I delved into house music and its black hole of subgenres and just started cracking away at it. It wasn’t just making house tracks though, they had to be treated like a normal score in terms of their tone, trajectory and their contour to match the scene, so there was always a lot to consider. It was actually a fascinating process. There’s a lot in the show, but I think the main thing to expect is to come out feeling like you’ve shared something with the people around you, that you might get that ‘feel good’ feeling in the pit of your stomach.

WWD: You guys have had a busy few months with Electric Picnic, The Dublin Fringe and this week at Imagine, but what’s next? Are you going to take the show on tour or just head back to the club?

H: We’re taking the show to Waterford this week for one night in the Imagine Arts Festival and we are certainly looking to bring the show further. We’ve had a solid response at the Cork Midsummer Festival and Electric Picnic. I think we have a real opportunity to engage young people in theatre and art using a conversation that they’re having themselves right now. We love transforming warehouses and I’d love to take over a variety of spaces around the country and the continent.

If you’re looking to catch SLSD at the Imagine Arts Festival, grab your tickets here.