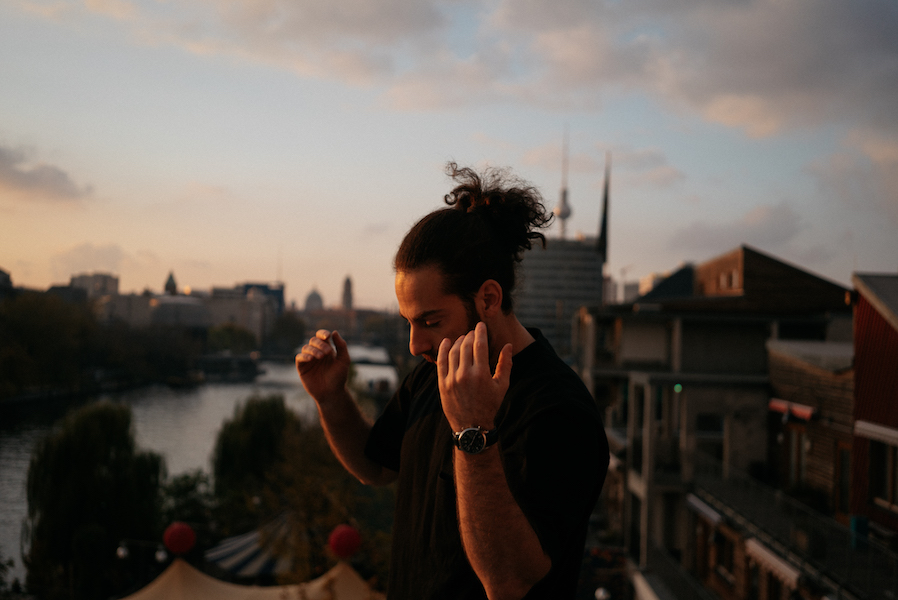 Electronic dance music, melodic house or techno – simply sorting Paji into one of these genres would not do justice to his musical uniqueness. Since his first EP, released in 2013, he created unmistakable listening experiences from a symbiosis of classical and traditional instruments as well as synth- or DAW-generated electronic sounds.

Now, in 2019, things have changed, been stirred up and the contemporary dancefloor is not necessarily the main point of reference anymore. Paji’s album released on Katermukke goes beyond anything he’s ever done, sports different influences and – especially in tunes like „Oraman” – pays homage to his musical upbringing rather than referencing the next peak-time sensation.

It’s no coincidence that the album bears his name “Paji”: titles like “Intoku” lead the listeners to his oriental roots. On the other hand, Paji shows his musical cosmopolitanism and love for contemporary, melodious dance music in „Wild Flowers” and “Virtue”. A special highlight is the collaboration with his long-time friends and companions Tube&Berger, which resulted in a mystical groovy track : „Raw Water”. With the Outro “Yggdrasil”, which means as much as “world tree” or “where everything comes together”, the musical circle closes and the album finishes, as it began – with an audible and perceptible journey into Paji ‘s world of colorful music.

It’s evident that this album brings more to the table than just computer generated loops catering to the most basic needs of what makes electronic dance music floor functional. Each track is a thought out composition in its own right; all eleven of them combined can make up as a single masterpiece debut perfectly defining Paji’s distinct style and approach to create music that’s suitable for the club environments, car rides, sofa listening sessions as well as, strolls in the nature. You can read the full interview while listening to the full premiere of his collaboration with Tube&Berger ‘Raw Water’ exclusively on When We Dip. Enjoy

WWD: Hi PAJI, thank you for taking the time to talk to us here at WWD. Tell us about how you got into music and playing all these instruments?

Hi, thank you for the invitation. I was very young when I showed my interest in music. My father plays an Iranian instrument called Tar. Whenever he wanted to play, I tried to take his instrument. This must have been so annoying to him, that he bought a very small tar for me to have his freedom back. I think I was 3 years old. Later on, the same happened to our family friend who was a violin player. So then my parents decided to send me to a violin class. Lucky me!! Beside the Violin I still tried to learn other instruments. But the main focus was and still is the Violin.

WWD: How has your background shaped your music career?

Of course my background has a big influence to my productions. As I learned to play the violin classically, I learned also Iranian and Kurdish music. This is what I bring into my music today.

WWD: You have your debut Album called “PAJI” being released with the famous German label Katermukke. What was the reason behind calling it “PAJI” and how did you come to release your album with this label?

It was an easy decision to name the album after myself, simply because it is me! My various traditional and modern influences, my love for classical music, my life in Berlin, my friends and family and all the other things that make me who I am.

I played the first time on a Katermukke showcase at the Katerholzig in 2013. Since then I worked with the label. First, I did an EP and later I did a track for their 150th release. Velten (Dirty Doering) asked me years back if I’m planning to produce an album and that I should let him know if so. When I wanted to show him the first demos of my tracks, he just said ‘Paji, I’ll listen to the album when it’s finished and I’m sure it will be good’. He didn’t want to influence my creative process and I’m really thankful for that. I had my room and space to create what I really wanted.

WWD: There are 11 tracks in this album, each of them have its own unique sound and diversity and its own set of emotions, yet you still can hear PAJI’s signature sounds in these tracks. How would you best describe the music that you create?

This is a difficult question. I think there are different genres and styles on my album. Some tracks more middle eastern oriented, some clearly western oriented. But still I try to have my signature sound in all of them. Of course, one of them is the stringed instruments but also from the melodies it is pretty much Paji.

WWD: Can you tell us how long you’ve been working on your album, and which software/hardware and most importantly which instruments you used?

I was working around 1 year on that album. I worked a lot outside the box. Composing and arranging just with real instruments and recorded them later. Violin, Piano, Tar, Kemancheh, Percussions…. But for sure there was also a lot of synthesizers like the Sub37, Juno or the Prophet. In the end, it all went into Ableton where I processed things.

WWD: Speaking of instruments, you play all your shows and gigs as a live act. Could you tell us about the technique behind this, and what the live act would look like in the future?

When I started the project ‘Paji’, I had to make a decision what I bring to the stage and I decided to play just my own music and I wanted to perform live. So I basically play stems and loops of my tracks and rearrange them live. I can create space where I can play instruments in my set. I love to loop the instruments, go crazy with effects and play with the audience.

I’m working on the next step in my live set right now. For sure I’ll play the new tracks of my Album but also the performance and set up will change. I’m working with a crazy guy named Tom Wurzbach who is helping me out right now when it gets to tech-based and building the new controllers, visuals etc. But I don’t want to talk too much about it. It should be a surprise.

WWD: Which artists have you collaborated with on your album and how did you come about choosing these artists for your debut album?

I’m really happy about the collaborations. When I started my electronic music career, I spent a lot of time in the studio of my good friends Tube & Berger. I had my first releases on their imprint. We still work together, so it was clear that there will be a collab on my album.

I met Namito when I moved to Berlin in 2018, but of course I knew his name before. We were introduced by a friend and planned a studio session. There was immediately a good vibe and we produced the track ‘Intoku’.

The collaboration with Thomasiom was a real pleasure. He is such a talented guy. Composer, multi-instrumentalist, producer….I think you can hear his musicality in ‘Seaside’.

Last but not least, ‘Wonderful Bones’. Coming from a different genre makes working together interesting. I really like his voice so we spent hours and hours in the studio together. It’s no coincidence, that he is on 2 tracks of my Album.

WWD: You have some gigs and tour coming up in the near future, could you tell us about it?

There will be a nice album tour. The release party will be at Katerblau in Berlin on 5th December, 6th I’ll be playing in Aachen where I lived before I moved to Berlin. This will be a great start. I’ll be in Ukraine and Russia before I leave to Asia. Back in January I’ll be touring in Europe again.


WWD: Finally, what are some of your future plans after releasing this wonderful album? Are you already busy at the studio?

The main focus right now is the new live set. Can’t wait to play it the first time in front of an audience. But for sure I’ll be back in the studio very soon to produce the next singles.