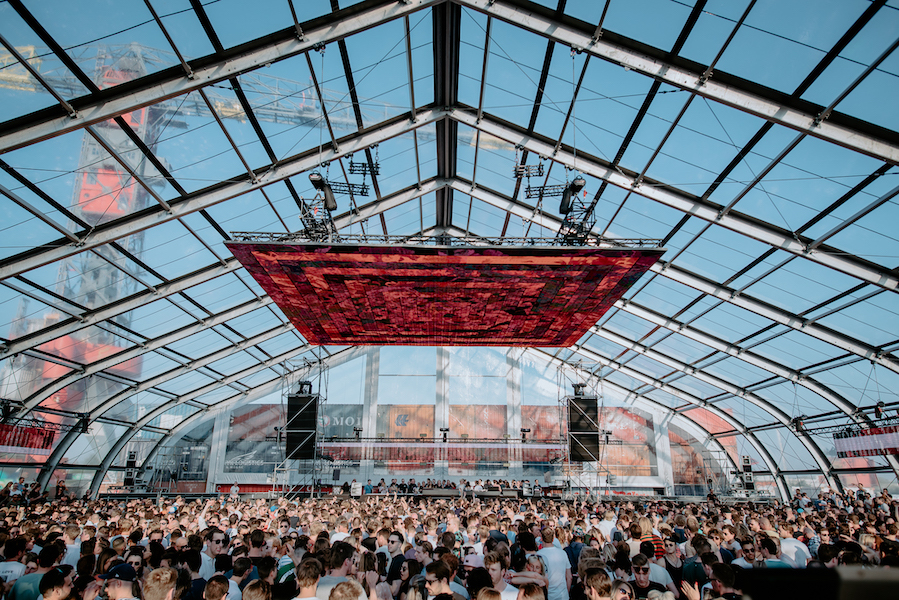 After making great strides in the field of circularity for years, electronic music festival DGTL is taking a crucial next step during its upcoming eighth edition. As a pioneer in the field of innovation and sustainability, DGTL has created a circular blueprint that can be applied to both a festival and a city. DGTL Amsterdam, which kicks off the festival season on April 11th and 12th at the NDSM Docklands, is, therefore, the world’s first electronic music festival that pursues full circularity.

The DGTL sustainability program has been running since 2013 and has been aimed from the outset to close cycles in the areas of energy, water & sanitation, food, commodities (waste) and mobility. As the aim this year is to close the entire DGTL circle, organisers have deemed the term ‘CYCLE’ their overarching theme for the 2020 edition. DGTL will close the cycles for a number of on-site systems, including energy, resources, water and sanitation.

Of course, DGTL remains first and foremost a music festival, and for years have been working with a sustainable way of programming, combining international headliners with local talent. With over 65 artists spread out over seven stages, DGTL focuses on deepening and broadening the music line-up. For the broader audience, the Modular and AMP stages create a real festival vibe. Connoisseurs and purists can find their way to the techno stage Generator or the more underground-focused Filter. An increasingly prominent part of the program is set up for live performances on the large LIVE stage. View the full line-up at https://dgtl.nl/artists/line-up.

COLLABORATION WITH THE CITY OF AMSTERDAM

It’s entirely feasible to view a festival as a temporary miniature version of a community. People work and consume, move, eat and sleep. Much like in a community there are all kinds of different flows such as money, energy, food, exchange of knowledge, water and creativity. For this reason, DGTL sees its festival terrain as a living lab for circular innovation in neighbourhoods and cities. By entering into partnerships with, among others, the City of Amsterdam and the Central Government, the festival takes on urban challenges on themes such as the energy transition and a new more sustainable form of sanitation.

With regard to energy, the objective this year is simple: during show days, energy consumption must come entirely from renewable sources. This means from sun, wind or other inexhaustible sources. The City of Amsterdam has invested in the event facilities at the NDSM Docklands; for example, the construction of additional power boxes has increased access to the main power grid. This means that all energy-demanding parts of the festival – such as bars, lighting and the food court – can simply use the sockets on the NDSM Docklands for their power supply. DGTL’s energy system will be completely energy-neutral and emission-free during show days and the festival is parting ways with traditional diesel generators.

FROM URINE TO WATER, FROM POO TO COMPOST

DGTL has also started a pilot together with the City of Amsterdam, researchers, toilet suppliers and processors to realize a circular sanitary system at the event. Urine is converted into (gray) water and faeces are processed into compost. DGTL hopes that this pilot offers a blueprint which neighbourhoods, cities and the music and events industry can learn from.

After the introduction of a meat-free food court in 2016, in recent years DGTL has moved towards a menu consisting of rescued food and imperfect products. This year DGTL is taking a step further by offering a fully plant-based (vegan) menu put together by a select group of chefs.

Another important spearhead is the reduction of greenhouse gas emissions as a result of mobility movements. By far the largest part of DGTL’s greenhouse gas emissions is caused by the travels of visitors. Artists’ flights, transport of suppliers and the use of machines during the festival build and dismantling process also produce emissions through burning fossil fuels. DGTL is closely looking at ways to make mobility (visitors, suppliers, artists) as efficient and sustainable as possible.

Regarding the fuel used for the machinery used during the set-up and breakdown of the event, DGTL will switch completely from diesel to biodiesel this year. With this, the festival reduces the CO2 emissions in that area by 89 per cent. This year, DGTL also focuses on making travelling by train attractive for both national and international visitors. The festival offers special ticket deals, promoting national and

international train transport when purchasing a ticket for DGTL Amsterdam. DGTL aims to direct as many visitors as possible towards travel by train instead of flight travel.