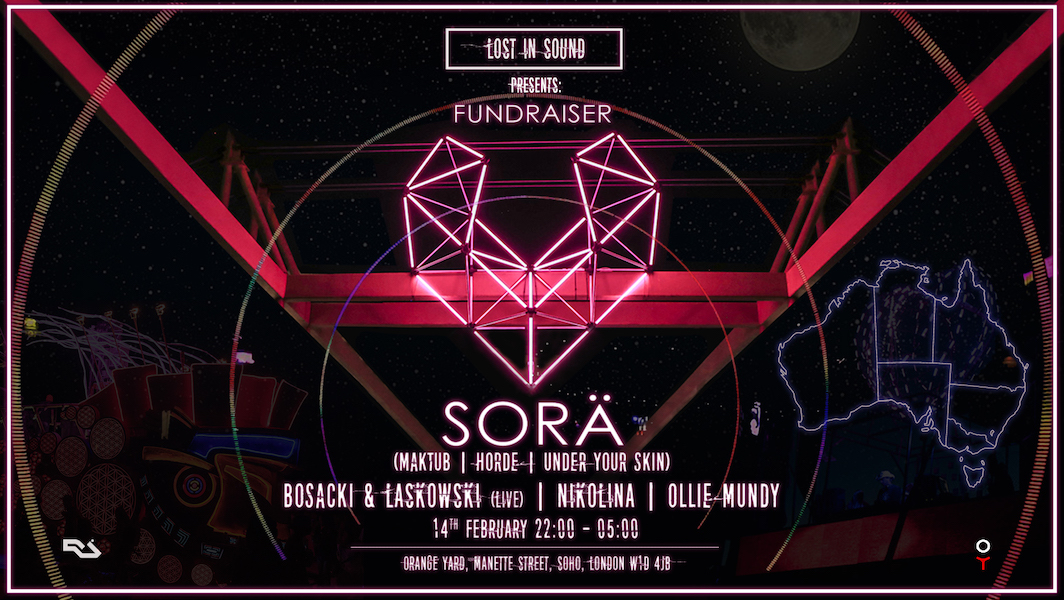 Lost In Sound organize an Australia Wildfire Fundraiser in London

This Valentines night, London based melodic vibe pushers ‘Lost in Sound’ return to Orange Yard in the heart of Soho, a club with a brand new Funktion-One sound system and full lighting rig from 10pm til the early hours with something a little different. After the tragic fires in Australia, the team behind the event decided that they should do  what they could to help and show support to the recently burning continent. Carefully picking charities that have been vital in securing the safety of animals, humans and nature alike, ALL proceeds from this event will be donated to them.
After almost 3 years throwing parties in some of London’s great venues, E1, Night Tales, The Cause to name a few. As well as across the globe at festivals and parties such as RPMM in Portugal, ADE in Amsterdam and the much revered Burning Man, Lost in Sound have solidified themselves as one of the go to events for melodic house and techno. Expect to see lots of smiling faces, spectacular outfits and the signature production that always makes a visual impact wherever they go, as well as being seduced by the sounds of the talented Lost In Sound residents, Bosacki, Ollie Mundy, Nikolina and newcomer Laskowski.

Headlining this event is SORÄ, who’s  music originates in many places. The Parisian’s signature sound is a perfect fit for Lost in Sound, loaded with powerful grooves, progressive melodies and traditions from around the world.Inspired by his oriental and Balkan roots, Sorä has developed a passion for discovering sounds from around the globe. His music takes inspiration from poets, musicians and everyday people wherever he meets them, fusing whatever their history has brought to them into his projects. Whether it is an Indian chieftain’s speech, or a middle eastern poem, for Sorä, there is music in everything.As a founding member of nightlife institute Horde Paris he has had a big impact on the city’s nightlife since 2011. Since then he has caught the eye of the world as resident of Satori’s Maktub nights and with shows at The Gardens of Babylon, @Zero NY, Boneca, SOUQ and more.

So whether you are single or in a couple this Valentines Day, why not show some love to these charities that really need it.

How can you help this fundraiser:
– buy a ticket online
– share this event and invite as many friends to it as you can
– volunteer as a ticket scanner at the door
– volunteer as a photographer/videographer
– get in touch if you have any ideas how you could help and get involved

Go and get ‘Lost In Sound’ whilst knowing that you are contributing to a cause that really matters. What could be better?