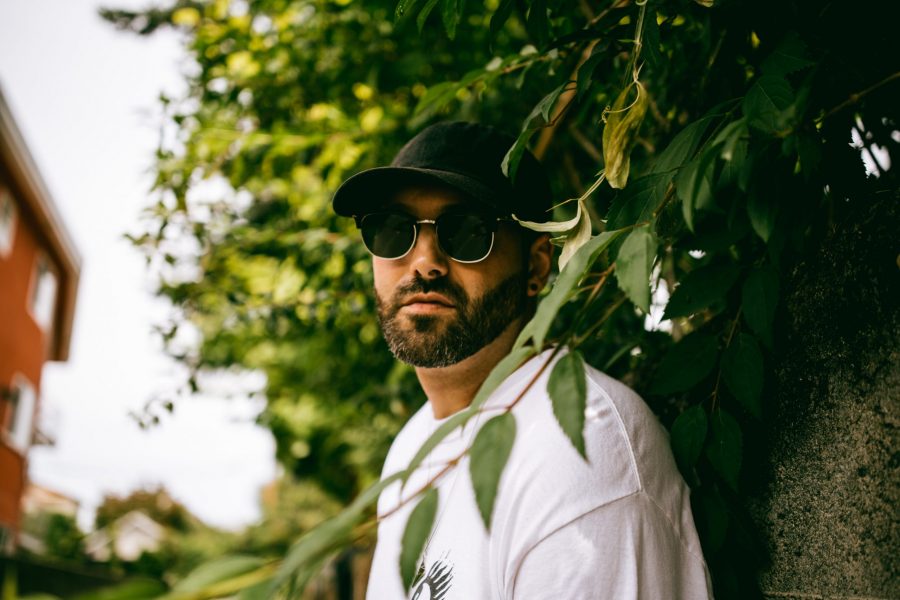 Max Ulis makes a debut this month on emerging imprint EARUHAVEIT. Ulis, also one half of Sabota, has played an instrumental role in the building of Vancouver’s underground, curating the likes of Bass Coast Festival and the renowned SLAB Parties.

EARUHAVEIT label boss and DJ Due Diligence aka Francis Ledisko takes over the Q&A reigns this week to source a little more info on the path of Ulis and the new release. What’s more, check out an exclusive sliver from the release in the form of ‘Free 2 Be’.

When We Dip · Premiere: Max Ulis – Free 2 Be [EARUHAVEIT]

Francis: Hey Max, it’s a pleasure to virtually sit down for a chat with you. Thanks for taking time out of your busy disc golf schedule to do this.

My pleasure Francis, ha disc golf, my new past time to help keep me sane during covid. I’ve learnt that disc golf courses seem to mostly be filled with semi employed men who look like they are pondering their life decisions, with the current state of affairs I fit right in.

Even though we’ve yet to meet IRL, I’ve come to notice that we share many similar interests, and most notably share the same taste in club music at this point in our musical journeys. I’ve always been fascinated by how this can happen, like how I’ll meet someone from the other side of the world who vibes at the same frequency as me even though they’ve come to this point through totally different experiences.

It is pretty interesting, but we do happen to come from the same part of the world!

Francis: True; same country, but different coasts for the most part! I’m curious to explore how our paths lead us to the same place. Let’s start from the beginning. What kind of music did you play when you first got into DJ’ing?

I think the first proper dj record I bought was something on Good Looking Records in the late nineties, I found drum & bass through my love for British acts like Tricky or Massive Attack and my younger brother and I used to obsess about the first Metalheadz Platinum Breakz Compilation. Other styles of records I was buying at the time were hip hop, some dancehall and also some weirder IDM ish stuff. I would go to Scratch Records in Vancouver and the guys working there had amazing taste so I would end up buying a lot of what they recommended. I have always had very eclectic taste in electronic music. I’ve always been curious, I’d go to house shows, dnb shows, down tempo, whichever, if the music was interesting I’d be there. I grew up in the middle of nowhere in Quebec, and attended the odd rave in Ottawa/Hull, so when I moved to Vancouver I was just kind of keen to check everything out.

Francis: What were some of the key pivot points, or “eureka” moments whether as a working DJ or club-goer that steered you in new directions throughout your career?

I think when I figured out how to actually be a dj by learning my skill well enough to have the confidence to keep moving through a bunch of different styles fluidly and not relying on any sort of set list, just trusting that what I have in my crates is great and letting the crowds energy dictate where we all go next. You get to that place where you are all moving as one, that’s the “ah ha” moment for me.

Francis: I noticed while stalking your Facebook page (no shame) that we’ve often booked/played with the same European DJs in the last few years. I didn’t compare dates but it’s likely that those artists played with me in Montreal and then with you in Vancouver the weekend after. Has your work in booking shows, either for your SLAB parties or for Bass Coast festival, had a big influence on what you do as an artist?

I would say that being able to hear my fave artists play their latest and greatest material is certainly a big source of inspiration in my own productions. Seeing and feeling that energy when something new and special is happening is the juice I need to keep going. Bass Coast is a lot of fun because we book the festival as a team so I have to keep up on all genres of music and I guess that kind of informs my production, as you can probably tell I am by no means a purist, and my tracks and dj sets reflect that.

Francis: The tracks on your EP for EARUHAVEIT have a definite edge to them, in terms of how kick & bass slap you in the face. It’s not exactly a “kind” low-end if you know what I mean. It’s something I always get excited about in club music, but it’s tricky as it only sounds right in a certain kind of sound system so I don’t always get to deploy these types of tracks. You find this sound more commonly on UK or Dutch labels like Clone for example. Would you say that your knack for this kind of groove comes from your past affinity from dubstep, or more broadly from the large bass-music scene on the west coast? Do you feel like clubbers in BC appreciate fat bass lines more because they are familiar with the idea of the low-end being a huge part of the track, allowing you to be more comfortable dishing out house & techno tracks that they are totally unfamiliar with?

Well, I am definitely used to playing on big systems that can handle that kind of low end. I would definitely say that Vancouver dancers favour a nice thick low end and are quick to point out when a system is underperforming. That said the house and techno crowd here are very informed and the vast majority of them were never interested in the bass stuff that I have spent time with. There are a few promoters in town that do strictly house and techno, where as I have been lucky enough to get away with booking a bit of a wider spectrum because people seem to trust my taste.

Francis: It’s a weird time for dance music now because with no actual club scene, none of us can test out new material or weave a new stylistic current together. I think we’ve already both picked up on a new style of modern electro-influenced club music that’s a bit more flowy and pumping than the tracks on this EP for example. I get the sense that the lack of parties has totally levelled the playing field as far as what people play, and who’s deemed a headliner. What do you think it’ll be like when clubs re-open? Perhaps lineups will feature more local DJs as budgets will be small & capacities limited? What kind of tracks will you have at the top of your playlist?

I absolutely think that this will be a renaissance of sorts for local DJs for many reasons, the first one being necessity, I imagine travel bans will be in place for some time. Secondly after what we have all gone through I don’t think anyone is going to be keen on paying the kind of door prices we were getting used to for touring artists. Vancouver has a deep stable of talented artists and DJ’s that in my opinion could all qualify as headliner material, so I don’t think anyone will feel like we are missing out on anything. I have been on a creative tear as of late and to be honest I just want to show off all my original productions! With the internet and the ability to get your hands on nearly any track ever made, I think playing your own tunes is really the most surefire way to stand out as a DJ.