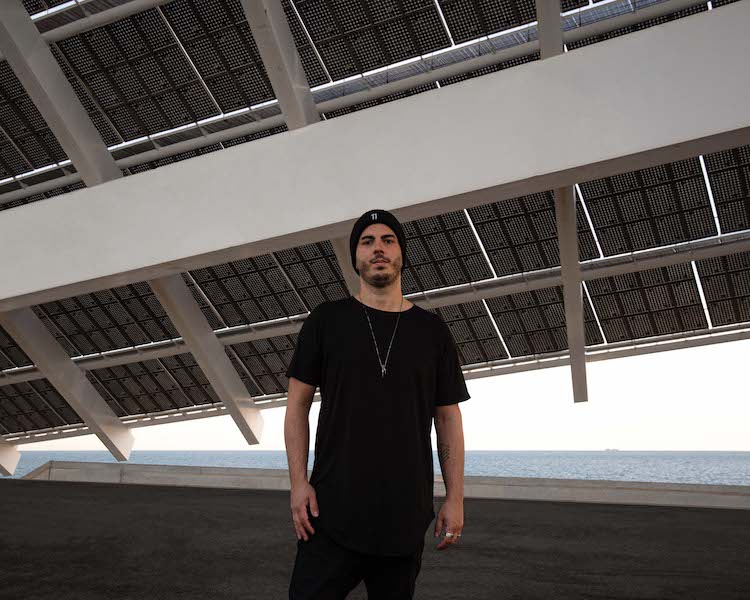 The man behind the decks for episode 125 of the When We Dip Mix Series is prolific Brazilian producer Wehbba! His pumping one hour set is filled with gems by the likes of Dubfire, Richie Hawtin, and of his own productions of course. We also had a chat about his new live act ‘Live Station’, the way he integrates his writings in his craft and the many exciting remixes he has coming up later on this year, for the likes of Martin Gore from Depeche Mode as well as Marc Romboy and Stephan Bodzin. Enjoy!

WWD: Olá Wehbba! We’re glad to have you for episode 125 of the When We Dip Mix Series. Where in the world are you right now and what have you been up to lately?

Hi! Happy to be a part of the series, thanks for having me. I’m in Barcelona, where I live and have spent most of the past year and a half. I’ve been working quite a lot on new music lately, and also on my new live show: Live Station. Besides that I’ve been taking care of myself and trying to enjoy the city and surroundings with my people.

WWD: First of all, what can you tell us about Live Station? What are its characteristics that make it unique in your mind?

I’ve actually just had my debut with the Live Station earlier in August, at the Family Picnic festival in France. It was an insane experience! This is a project I have worked on as part of the tour for my album that was released last year on Drumcode Records, ‘Straight Lines & Sharp Corners’, and since I couldn’t take it on the road, for reasons we are all tired of hearing about now, I just kept working on it, refining the setup, trying lots of different things within the setup and the performance. It’s full on hardware based, so no computer involved whatsoever, which for me is really important, as I don’t really feel computers are great tools for stage performances. I prefer the immediacy and interactivity of instruments, it feels a lot more inspiring to me, and it took me many years until I could work out a set up that would give me total flexibility as well as being super reliable. Based on the first experience I had I can say I’m pretty happy so far with how it turned out.

WWD: And how was it preparing it in a pandemic context? Any specific challenges related to it?

Not really, I already had all of the equipment, and I just kept making adjustments to the workflow and also incorporating some new gear as I discovered them, but being locked in the studio most of the time allowed me to experiment and refine the performance and the sound a lot more, so if anything it was actually working in my favour.

WWD: In the demo reel for this live act I saw, I immediately noticed your use of Richie Hawtin’s and Andy Rigby-Jones’ now famed MODEL 1 mixer. How integral is it to your live setup? Was it an obvious choice when it came to pick a mixer to center your act around?

The Model 1 is an amazing mixer. It sounds amazing, and I instantly fell in love with the way the controls are laid out. I needed more channels than a regular DJ mixer and the Model 1 has 8 stereo channels I can use to mix in the instruments, add to that the ‘drive’ function in 6 of those channels and it was hard to choose anything else. I didn’t have to adjust my setup to anything, the Model 1 checked all the boxes I had in mind for a performance mixer.

WWD: Back in May of this year, you’ve also unveiled your first art exhibition ‘Instinct’, with friend Virginie Chemla. What was the driving force behind this project? How did it come about?

‘Instinct’ was born out of mine and Virginie’s common quest for connecting the self with nature, the internal and external world, each of us using a different artistic form that would compliment each other and expand on their individual meaning.  I met Virginie little over a year ago at her first exhibition, and we became good friends. She knew I started to work on my writing and out of the blue she came up with the idea of us working together on this. She brought in the paintings, and I wrote the poems that compliment each painting, and vice-versa. It’s all very new, and it’s been an amazing and inspiring experience to work with someone as talented as Virginie, and who shares so much of the same values as me. We plan on taking this to different cities and galleries, as well as expanding the whole thing into other formats, it’s still in active development.

WWD: In announcing that exhibition, you’ve also revealed, or at least put more to the forefront your other channel of artistic expression: Writing. Did it come even before music for you? How has it been to keep it mostly private while at the same time putting so much out there musically in the past 15 years?

I’ve always been interested in writing, since I was a kid, not before music but pretty much in parallel, and I’ve always kept it private. I did write tons of lyrics of course, as well as poems, but I never really considered putting my focus on anything other than music. Then last year came, and it inspired me to start writing again, as music became a struggle for me without human interactions. I guess I needed this kind of push, from both the world falling apart and having a friend with bold ideas coming around and inspiring me to put this out in the world.

WWD: Do you think you’ll combine those two art forms even more in the future? A bit in the way you’ve done with one of your poems for your album ‘Straight Lines and Sharp Corners’, including one of your poems in the vinyl version of the release.

That was definitely a start, and a good opportunity to introduce this side of my artistic output. As I started to work on more introspective stuff, I’ve also started to experiment with merging my poems with more atmospheric, experimental ambient soundscapes, as a way to create an immersive experience, focused on being present, in art, with all senses.That’s why I’ve created another project, called ‘Inner Soto’, to combine all of the art forms I usually explore into one thing. So far I’ve only released a remix for the Brazilian legend Rita Lee’s classic ‘Doce Vampiro’, as Inner Soto, and of course the soundtrack for the ‘Instinct’ exhibition, but hopefully soon I’ll be able to reveal more about this project.

WWD: Finally, I also want to ask you about your upcoming remix of Martin Gore’s [Songwriter and founding member of the emblematic Depeche Mode] – ‘Capuchin’. How was it to give your take on the work of such a pioneer of electronic music?

To say it was a dream come true is an understatement. Getting my hands on the individual stems from the original music from Martin Gore felt almost surreal. The original ‘Capuchin’ had so much sound design tricks going on that it inspired me to go on the same path, so I really explored lots of subtle sound design ideas as well as abused all of the original parts, since they were so good! Just to imagine him working on those sounds kept my inspiration levels exploding all the way through as I worked on the remix, which allowed me to finish the whole thing in less than a day. Later I just tweaked some of the details and the post-production once the remix was approved. I’m incredibly grateful to be a part of this release!

WWD: It’s a pleasure for us to have you for episode 125 of the WWD Mix Series! What can you tell us about the mix you’ve prepared for us?

The pleasure is all mine. I’ve used a bunch of new stuff I’ve been collecting lately, as well as some of my new stuff, and I hope you’ll have as much fun listening as I had recording it.

WWD: Thank you very much again Wehbba, a pleasure! Any exciting bits coming up in the next few months? Things to announce?

I have a bunch of remixes coming up, the first one being my remix for Martin Gore’s MG project, for the track ‘Capuchin’, in October another remix for another icon and personal hero of mine, as I remixed ‘Velocity Funk’ from the E-Dancer moniker of Kevin Saunderson, which is coming out on Drumcode. In November, something very exclusive coming up, as I’ve teamed up with someone special to remix two very special guys, Marc Romboy and Stephan Bodzin, on Systematic Recordings. There’s another single of mine on Drumcode coming up as well as some other pretty special remixes, but it’s a bit too early to comment on those ;