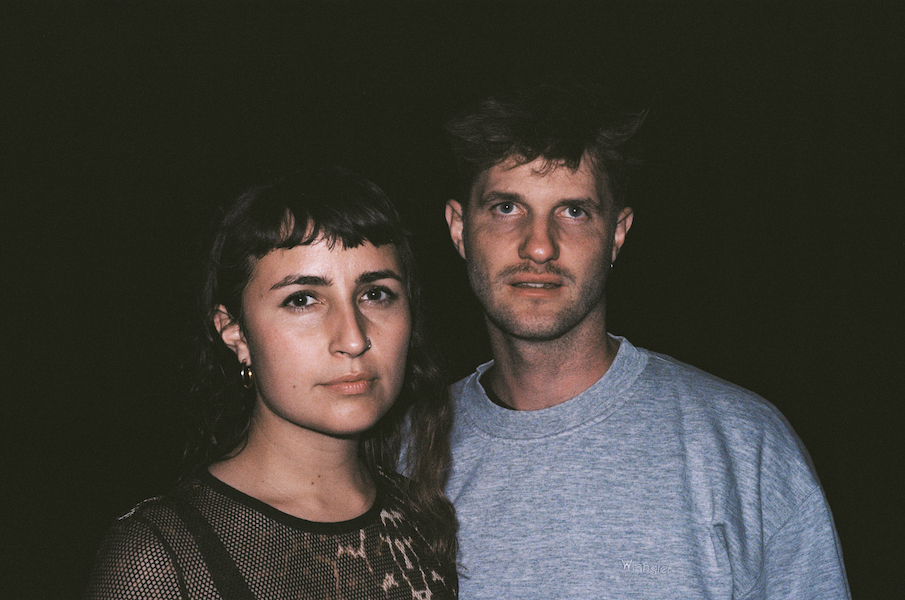 When Ameli and Paul’s paths crossed in 2016, they immediately felt the urge to fuse their approaches of making music – the succinct and intricate productions of Paul, with Ameli’s sentimental voice and inherent songlike musicality. Constantly honing and evolving their live performance and studio output ever since, the duo now stands for a stirring electronic sound that ranges from abstract cinematic excursions all the way through to more pop-leaning song structures.

Following the critically acclaimed release of their stunning three-part Beyond Reason EP on MEIOSIS back in February, the Berlin-based electronica duo now looks to end 2021 in emphatic fashion, pulling out all the stops with their remarkable new Mycelia EP. Released via Drosssel, the seven-track opus features four brand new original productions from the in-form duo, together with a dark, trippy music video and a selection of remixes from two Berlin-based outfits – Curses and Brigade.

Inaugurating the EP with the mind-bending opener, Voce, Ameli and Paul come together for one of their most absorbing sonic offerings to date, delivering a captivating amalgam of warped, atonal synthesizers, despondent vocal samples and chugging, syncopated bass guitar riffs. Setting a tone for the remainder of the package with organic beats and complex analog effects, the arresting starter is further complemented by a macabre, somewhat sinister music video, created by Stuttgart-based director and filmmaker Harry Delgas. Featuring a satanic set of cameos from Ameli and Paul, inspired cinematography from Dan Trautwein and mind-altering art direction from set designer Angelina Häuser, you can check out the trippy four-minute audio-visual representation in its entirety here.

Entering an altogether different dimension with the second original, Dry Cough, Ameli Paul’s sophomore offering on the package pulsates with a more affirmative midnight disco energy, as throbbing basslines, stripped-back percussion and retro synth-lines come together in perfect accord, to bring the listener into a more lucid realm of consciousness. Ebbing and flowing with deliberate juxtaposed intention, the package is then brought into another abstract, almost soporific state with Pilze, before Ameli Paul conclude their creative contribution with the spell-binding, ethereal ending, That’s The Problem.

But that’s not all. First up on remix duties, adding his unique double-sided twist to the record, is none other than Italo-American artist Curses. Known across the industry for his inimitable blend of Post-Punk and New Wave – punctuated with flashes of 80’s EBM and New Beat – the New York-born, Berlin-based talent delivers his dark-oriented soundscape across two raw, unbridled remixes of Dry Cough – one for the digital release and the other an exclusive ‘Dysto Beat Mix’ for the vinyl release.

Last but by no means least, capping off their most extensive body of work to date, Ameli Paul hand the reigns to close friends and compatriots, Brigade, for a funked-up, four-to-the-floor finale. Also based in Berlin, where they developed their unique brand of idiosyncratic electronica, they step up to the plate as only they know how, combining keytars, drum machines and slick riffs to close out the EP in style.

Hot on the heels of their EP release, we caught up with Ameli Paul from their home town of Cologne to find out more…

WWD: Hi guys, and welcome to When We Dip. So lovely to have you with us for the first time.

Cheers! Thanks for having us!

WWD: Can’t quite believe it, but we’re quickly approaching the end of 2021. How has this year been for you so far? Any highlights?

To be honest this year felt like a never-ending emotional rollercoaster. In February we released our debut EP on Meiosis which was a huge milestone for us. Then we eventually moved to Berlin after a long lockdown winter as it felt like the right place to be, surrounded by creative energy, new inspiration and a lot of friends. Right when the long awaited live shows came back our car got broken into with all our music equipment stolen. But not knowing how to recover from that, we experienced such a huge support from fans and friends around the world so we could get on our feet again and play the planned shows. Once again a big big thank you from the bottom of our hearts – that was without any doubt our biggest highlight!

Thereupon we had the chance to perform at beautiful festivals in Germany, France, Greece, Switzerland, UK and Russia and realized once again what we had missed so deeply since Corona hit the world. The cherry on the cream is of course the release of our new EP ‘Mycelia’. It’s filled with music that embodies the anger and need for escapism. Feelings we were coping with during 2021. Retrospectively the last year challenged our relationship towards life as a musician and ourselves but at the end it showed us how important it is to support each other and that we are really passionate about pursuing this path together.

WWD: Starting at the beginning, can you tell us how you met?

Paul: It was at a small festival a couple of years ago. Back then Ameli was playing with her band and I would play my solo live set. We instantly loved the musical energy of each other and we arranged to meet in the studio. That session was an eye-opener for both of us. We were surprised by the magic and dynamic that was set free by endlessly improvising together and had no other option than to start Ameli Paul.

WWD: How did you get into music?

Ameli: In my family music is and always was omnipresent. My parents are classical musicians, my sister plays the violin. My brother’s main instrument is the double bass but he is also the bandleader of the amazing ‘Seba Kaapstad’. I always had so much fun playing around with the piano, evolving melodies and singing in a fantasy language. Between all my difficulties in school, teenage friendships and finding myself, creating my own music was always a place where I felt safe.

Paul: When I was 8 or 9 I started to write my first childlike lyrics and would design album covers for bands I made up. My father taught me the guitar and from the age of 14, producing hip hop beats and rapping was all I cared about. So I guess becoming a musician was always an unconscious dream that I hadn’t pursued seriously until a few years ago when I met Ameli.

WWD: How would you best describe your sound to those who may not be familiar?

Oh that’s a tricky one as our sound keeps evolving constantly. It spans from breakbeats, punchy indie dance tunes to 60 bpm soul. We are too curious and chaotic to stick to one thing and hope to never settle down and repeat ourselves.

Ameli: I was a huge fan of Destiny’s Child, Rihanna and Portishead. But also bands like Massive Attack, Deftones and Skunk Anansie had a big influence on me. The first electronic music I felt drawn to was Lexy & K-Paul.

Paul: In my youth I was heavily influenced by teenage Weltschmerz and Hip Hop artists such as Talib Kweli, Dr. Dre or The Roots. Later Trentemoller, Super Flu opened up the world of electronic music to me.

WWD: You’ve just released your brand new seven-part EP ‘Mycelia’ on the label ‘Drosssel’. Can you talk to us about the record, and the creative vision behind the project?

On our current EP ‘Mycelia’ we explore our darker side with heavy beats, a lot of analogy processed and alienated vocals and experimental excursions at the end. All the tracks were written in autumn / winter – so releasing it in December feels absolutely in accordance with the seasonal mood and the universe. Drosssel is a label that allowed us to portray a wide array of our facets and invite the listeners to a psychedelic trip into their minds. We wanted to create an EP that would both work on the dancefloor and in your living room on vinyl.

WWD: You’ve also put together a rather haunting music video for the lead single ‘Voce’. Can you tell us more about that?

‘Voce’ kept provoking emotions, images and associations in our mind that we wanted to transfer into a surreal and psychedelic music video following us on a trip into the rabbit hole. We assembled a wonderful team of very talented and dear friends and shot the clip within three days in December ‘20. We loved everything about that project! The atmosphere when working together, the incomparable props and creative ideas of Angelina Häuser, the vision of Harry Delgas, the intriguing visual imagery of Dan Trautwein and the mystic lights by Wolfgang Schadow. Harry did an amazing job absorbing our initial ideas and merging these diverse impressions in the cut into a weird yet cohesive story and adding his very own handwriting to the piece.

WWD: The EP is completed by remixes from Curses and Brigade. How did these come about? Have you worked with these artists before?

We’ve been a big fan of Curses’ unique style and felt like his touch could harmonize well with the rest of the EP. He then even created two versions, one of them will be vinyl only. Brigade are dear friends for a while now and stand for a groovy and uplifting House sound that adds a refreshing sunny colour to the whole package. We couldn’t be happier with the results! It’s an indescribable feeling to listen to the interpretation of your own sounds by artists that you truly admire.

WWD: Do you have any other releases or tours planned in the coming months?

At the moment we are heavily involved with finishing our album that will see its light in 2022. We are planning to do some shows in Mexico in January and a support tour in February / March that we cannot talk about yet. Fingers crossed that clubs are allowed to reopen by then!

We hope you are doing fine despite the circumstances and setbacks in fighting the pandemic. Those are tough times, so be kind to each other and yourself! Keep your positive energy alive, hope to meet you soon on the dancefloor! <3

Ameli Paul – Mycelia EP (including remixes from Curses and Brigade) is out now via Drosssel. Vinyl will follow in January.