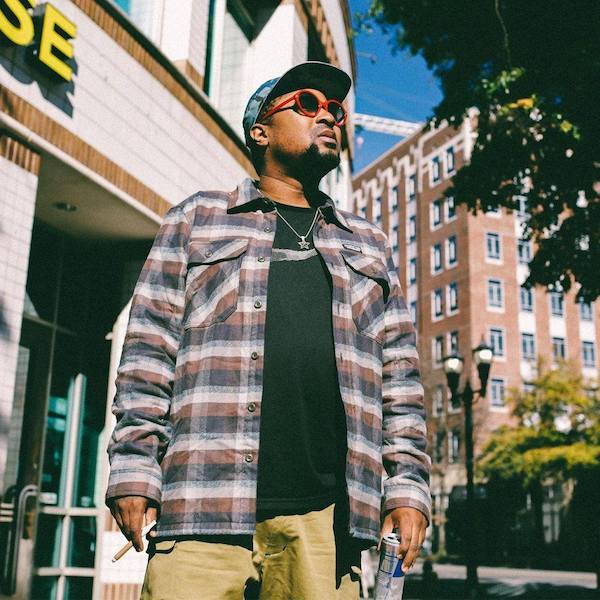 Heist Recordings has been pushing the envelope for house music since day one, always bringing the artists that represent their vision of electronic music. The next guest up on the label fits that profile and more! He is the embodiment of modern-day electronic funk and a true wizard on the keys: Atlanta raised cool guy Byron the Aquarius.

Byron has a solid history on the label, he remixed Parker Madicine back in 2017 and did a mad solo on the 2019 released Dam Swindle track ‘The life behind things’. He’s done some live shows with the Swindles and he stayed in touch while he was working together with Jeff Mills on his 2020 jazz crossover record ‘Ambrosia’ on Axis. Now, after a solid string of releases Shall not Fade and Purveyor Underground, Byron is making his solo appearance on Heist. His ‘Akira’ EP goes from dark basement grooves to dreamy broken beats and features a remix by New York dance music wizard Kush Jones.

You can now listen to the full premiere of ‘I Love Yo’ exclusively on When We Dip. Enjoy!

WWD: Byron it’s great to talk to you welcome to When We Dip. It seems like you burst onto the scene this last 5 years, but you’ve been dabbling music for a lot longer than that right?

Hell yeah! I definitely have. I’m like a Quincy Jones in this music game lol, but yes, I’ve been producing for a while, playing piano, arranging music, love to keep myself productive and always learning.

WWD: Is it true you come from the same place as Sun Ra? Did you know or come into contact with any of the collective in Birmingham?

Yes! I come from the same neighbourhood as Sun Ra, Birmingham Alabama, right up from my grandparents’ house. Always love to soak up Sun Ra’s energy when it comes to my creations and being different with my styles! I was also trained by some of his bandmembers in Birmingham, Doc Adams to Jothan Callins! RIP

WWD: Were your roots, first musical inspirations, and keyboard beginnings in jazz?

My deep roots were in Jazz Piano, that’s when I found my sense of style and creativity through improvisation skills in my creations, started playing piano at the age of 5 learning classical. My grandparents played a huge influence in making me go for learning piano “Space is the place.”

WWD: I know you got deep into Hip Hop in your early days. Who were the artists you were into in your teens?

Hip Hop! that was me all day, how I lived still till this day. Jungle Brothers, A Tribe Called Quest, Slum Village, Pharcyde, Dj Premier, Lord Finesse, Large Professor, WU TANG, etc… always banging the hip hop on my MPC 3000 AND 2000. That influenced me mad heavy towards knowing how to make the music swing and raw!

WWD: You later went on to actually work in the Hip Hop scene. Can you share with us what you did?

I worked in Atlanta working with MC BREED and my cousin. Was an honor being in the studio with him, legend! Later moved to Detroit and worked with Denaun Porter from d12, Eminem’s producer. Learned a lot from Denaun Porter on working the MPC 4000 and just his approach to music like Dre, great memories being in the studio with him, Arabb Beats, Alchemist, and his engineer who I grew close to. Cullen Brooks too, those guys taught me a lot about mixing and just getting that sound out/ Hip Hop definitely was first….

WWD: When you spent time in Atlanta you met Darren Benjamin aka Daz-I-Kue. Were you a fan of Bugz and the UK broken scene back then?

In Atlanta it was Daz i Kue, he’s just the realest, so humble and always was mentoring me, telling me to listen to something new and crazy. Met him the same time I met Kai Alce, for the broken scene UK that was definitely all I listened to all the time and Jamiroquai. I loved that whole sound with all those guys Dego Kaidi, etc…

WWD: I know Daz intro’d you to Kai Alce. Can you tell us about that meeting and the relationship that formed there after?

Daz and I met Kai Alce at Soundtable, that meeting was so organic something that I will never forget. Me with my Dr Dre headphones on with my laptop in the club making music crazy. It all came together… Mentors of my Life!

WWD: You’ve been fortunate to be pulled under the wings of some great mentors. How much do you feel that schooling and nurturing is part of the success you are experiencing today?

To just keep it 100! I felt like more of my knowledge came from the streets meeting people and mentors. school for some reason didn’t teach me the fundamentals out here. I learned from the OGs the way to get that is get your ass out here and network, meet people, always learn! You gotta ask questions, that’s what got me to where I am in life!

WWD: Is there someone in your life that you mentor?

My homies in my city, Birmingham. Really to be honest anyone I run into that needs the inspiration, I always been a guy to share knowledge and want to inspire people. It’s more of doing it for the culture! Only way to keep this moving like Kai Alce did for me is teaching people, inspiring people, this life is not easy but with simple great words it pushes us all, the yin and yang!

WWD: You’ve released on some incredible labels and with some artists on top of their game. Theo Parrish, tell us about your connection and release with him and Sound Signature.

Really it just was all organic, Kai Alce connected me, and it went from there and the rest is all organic connections universe power my G! I never planned, I just worked hard, manifested, and it happened!

WWD: You recently started your own label Talknoi$e. What can you tell us about the label?

T A L K N O I $ E really was an inspiration from Sun Ra and how he released his own imprints. It’s more freedom to me with this music shit! Owning your masters, having complete freedom to do what you want to. That’s the meaning of the label. The vision is to bring some amazing artists and producers together and make good projects that can be played anywhere. Not just one style, because I am more than that which I proved. I want to expand electronic music’s sonics of sound, that’s more the focus. When somethin’ drops you will for sho know. Fuck genres its music at the end of the day

WWD: How did you first hook up with Maarten & Lars at Heist?

To be honest it was more of Max Graef’s music that drew me to the label. Max Graef made some raw shit! Then after seeing that Dam Swindle release with a vocalist set it off for me then I said, hey these guys are dope. Then meeting them in person in Chicago and the Dam! I felt like, hey why not work and create something and see what happens. Respect to them G’s.

WWD: Talk us through the Akira EP a little please Byron.

A K I R A was more of a moment of mood from watching animations, playing video games in Tokyo, inspiration from kicking it, hanging at Jazzy Sport in Tokyo too. I like to just draw inspiration from my surroundings some of it was from older tracks from that time and it went from there.

WWD: What can you tell us about Kush Jones and what has he done on the remix?

That really just came from seeing the G in London, kicking it with Steven Julian AKA Funkineven. We talked some deep shit just walking through the streets of London. Heard his music and it was over. I was like why not get Ku$h on this, really love what he does for real!

WWD: Its seems like over the last few years the planets are aligned for you, and all of your years of hard work have brought you to this special place. Do you believe in karma and the universe?

Definitely believe in that. What you put into the universe, that’s what you get back. It’s all mathematics from that right there, just stay working hard, grinding putting yourself out there it will pop for you that’s realness!

WWD: What words of wisdom can you share to those in pursuit of their dreams?

Keep living your dreams no matter what anybody say. I tell people not everybody will understand the vision but there’s so many people in this universe, why listen to one? Just keep pushing your sound and putting that work in and it will happen for you. Learn the business, own your own music and be smart about it, that’s my knowledge right there.