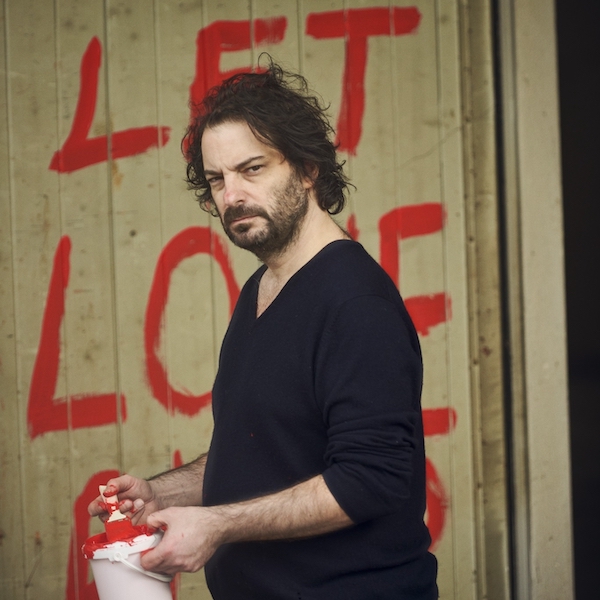 Kalabrese from Zürich is back with the second single of his upcoming album ‘Let Love Rumpel Part 2’. The new single ‘Eight Bars’ is massive Rumpelfunk, showing that it doesn’t need more than a simple bassline and groove to lean back in the spirit of Funk. This one’s gets under your skin and straight into your hips.

Kalabrese the pleasant Rumpelzampano from Zürich will be back with 11 Songs that get under your skin and straight into your hips. Pretty exactly a year after the release of ‘Let Love Rumpel Part 1’, part 2 is on the way finally. The follow up is less pop-structures, more trippy and floating, reminding of his debut album ‘Rumpelzirkus’ at times and levelling perfectly between head nodding moments, balearic sounds and massive Kalafunk.

The story of the album naturally continues and bears the hallmark of Sacha Winkler who’s not getting tired exploring and experimenting with his music, constantly developing it propelled by his dreams and visions. The Rumpelworld is the core of Kalabrese’s work but out of the blue a little surprises poppin’ up all of a sudden. The album is not exhausting at all, it comes with ease and leaves some space – like the perfect Panna Cotta or a glass of Merlot.

‘Kevin und Sandra’ is a strong, technoid, rocking yet poetic introduction to the album. Hypnotic driving synths howling over a stoner rock alike drum beat and a fluid rollin’ synth-bass. On top of that Kalaspatz tells the story of a raver couple on their way to a festival. Not much more than a little bag of excstasy pills in their pockets, the guys hoping to earn a little extra, failing grandiosely but ultimately experiencing great things while getting lost in the vortex of that festival night.

‘Springbrunne’ is a great “Rap without Rap” hymn featuring the elegant and relaxed voice of Kayyak. Over a heavy beat he’s toastin’ about reinventing himself through the splatter of a fountain before Deacon Blues, better known as Seth Troxler, suddenly joining in, droppin’ philosophic wisdom while the track slowly but surely rolling down the disco lane – driven by the brass and a walking bass.

The titlesong of the new album, ‘Let Love Rumpel’ is an ode to the joy of raving together but and the perfect soundtrack for sunrise. Spending a long night toghether, taking care about each other and then turn the night into day. Kalabrese always regards his music as second- or hidden floor music, going straight to the heart – softly embracing the tipsy and raptured.

‘Get Up And Try’ is the nimble answer towards the exhausting polemic about measures within the pandemic and know-all caprices. A children’s choir over a mid tempo house-beat, a beautiful chello by band buddy Dominik Löhrer and the swingin’ trumpet, performed by Rumpeljazzer Benjamin Danech, who’s immortalizing his big potential on this piece one more time.

‘Explore Yourself’ is a collaboration with the talented newcomer Palma Ada who caused a stir with her vocal contributions on ‘Let Love Rumpel Pt. 1’ already and settled so well in the Rumpelkosmos joining the Rumpelorchester for the recent live shows. Power-Rumpel-Techno, made to shake head and dance the pain away. On point and not a minute too long.

‘Die Kette feat Zoé Miku’ is a powerful and hypnotic mid-tempo balearic house jam. A sunset, somewhere in the Pyrenees, listening to the contemplative vocals of Zoé Miku, who’s in fact teaching people on the yoga mat in her daily live but equally enjoys the hazyness of a rave and unfolding on Kalabrese’s playground. Free, without blinders or fixed confessions.

‘Healthy Again feat. Palma Ada’ is the defiant statement why she – even as a ex up- and-coming fence talent – is currently not able to do her fitness programme efficiently. She rather sings about letting herself go in the moody melancholy of a hangover – backed up by a wonderful brass section.

‘Middle Of The Night’ is a stripped-back, lyrical segment – made for lonely taxi rides around midnight and for all people struggling with insomnia. Carefully sculpted sounds, smooth and low bass tones and a captivating simple rhythm. Kala is drifting away in his Rumpelkammer – a truly intimate moment!

The next track, ‘Halftime Blues’ is quite the opposite; heavy and slow, a dub without echoes with a slightly dystopic texture to it. Written in dark wintertime, at the climax of the pandemic when a couple of Uber’s were the only thing one could spot in the haze of the streets.

With ‘Don’t Loose The Center feat. Kayyak’ Kalabrese is celebrating the Rumpelfunk again – this time pimped up with a lot of piano and boogie while Kayyak is lifting his voice, really singing for the very first time and prooves why he’s matching so well in the Rumpelzirkus without loosing his uniqueness as an artist. Rumpelorchester’s bass player Marci Dobozi accidentally delivered the magnificent piano, cluelessly producing a the hook by foolin’ around in the studio while Kala’s is celebrating the bassline on his beloved Juno 60. It’s such a gift that those wonderful creative minds and musicians were able to let loose and just start jamming together during the pandemic.

You can now listen to the full premiere of ‘Eight Bars’ exclusively on When We Dip. Enjoy!