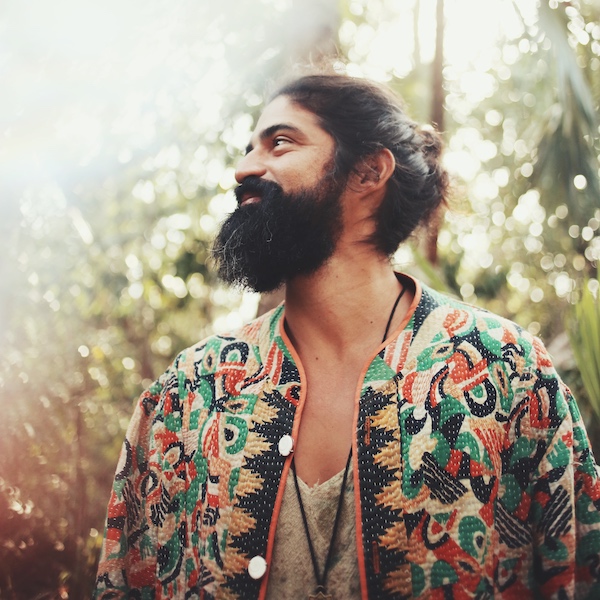 Lemurian is a Peruvian artist who is one of the people who pioneered the organic house genre with the help of his record label Cosmic Awakenings. He is internationally respected for his blend of ambient atmosphere and downtempo beats that he blends with organic instruments from around the world. A popular headline DJ who traveled the world to enchant dance floors with his mystical sound, he is a regular performer at places like Burning Man.

In recent times Lemurian has also left his mark on the music scene in Tulum, Mexico, and we caught up with him to find out more about his various projects…

WWD: Hi Lemurian, could you start by telling us where you are currently based, and what you think about the local music scene?

Thanks for the interview. I am based in Tulum, which is a place I found in 2015 thanks to music. It became the place where I can complete all my dreams, express myself fully and be part of a pioneering culture that is now recognized worldwide. Tulum is vibrant with its organic decor, tribal sound, beach clubs, open-air boutique hotels, and incredible natural beauty.

The downtempo and organic house scene has roots here, due to a more relaxed feeling on the dance floors which has a more spiritual and earthy approach. Places like Treehouse and Nômade have created a cultural lifestyle more connected to nature, and there are lots of other great venues with a similar mentality.

WWD: How would you describe your music style, and who are some of the artists that you draw inspiration from?

My music style is multicultural electronic. I like to create and play organic tracks that create a spacey and tribal atmosphere. My intention is to connect human beings from different parts of the world through dance and rhythms from instrumental melodies combined with electronic beats.

Some artists that have inspired me to share this organic downtempo sound include the likes of NU, Acid Pauli, Nicolas Jaar and Bedouin to name a few pioneers that started bringing a more organic approach to the dance floor.

WWD: You have played at Burning Man on numerous occasions, and we’re curious to hear you describe the event in your own words, as many of its regular performers have a special relationship with the festival?

Burning Man is one of the most inspirational and original experiences of our time, and I have been proud to attend. It is governed by principles that empower people to create, be more inclusive and become more sustainable.

Innovative ideas are shared through art in a huge desert with harsh conditions punctuated by unpredictable sandstorms. Surviving together as a community pushes the limits of the imagination and the shared ideas help expand the soundscape of music, which is one of the greatest parts of the experience.

I have been attending Burning Man since 2016 and thanks to my multicultural music, the festival has helped me get to know many people with a similar vision. Those inspirational connections have helped me share this culture of unity around the world.

WWD: As you already mentioned, Tulum has built a strong reputation for having a tremendous underground party scene, and we’re curious to hear more of your thoughts on this?

Yes, Tulum has become a global epicentre for underground parties. There are many high-end venues and natural cenotes (underground clear water pockets) where various hidden events take place, both in the jungle and beachside.

A lot of people in Tulum are looking for a more bohemian environment and people who have the hippy mentality to celebrate and enjoy nature. Many other electronic music scenes throughout the world are now following this trend and I see a lot of their inspiration coming from Tulum.

WWD: Many from the organic house scene need little introduction to your label Cosmic Awakenings. When did you start the imprint, and who are some of its main artists?

It was 2016 when I started Cosmic Awakenings and from the beginning, the record label has captivated me by creating more opportunities to connect with artists from across the globe.

Cosmic Awakenings has been a tremendous opportunity to help grow and share this organic style. Not only have I contributed my own tracks to the label, but I’ve also released music by great talents such as Turu Anasi, Seba Campos, T-Puse, Yemanjo, Zuma Dionys, JPool, Yemanjo, Valeron, Alvaro Suarez, EPHLUM, Arkadyan and many others…

WWD: What’s coming up in the Cosmic Awakenings’ release schedule, any big releases you can tell us about?

There is a lot of exciting new music coming from Cosmic Awakenings and on December 22nd, we are releasing ‘Mitad de la Noche’ which is a single from EPHLUM’s album that comes with remixes by Valeron, Alvaro Suarez, Zuma Dionys, Alex Twin and Chris IDH.

The other one is a tribute to Gloria Estefan’s track ‘Conga’ which has been reworked by Carla Valenti & Matija who have elegantly incorporated electronic sounds. Both of those edits will soon be available for free download on our SoundCloud page via Hypeddit.

WWD: You have released lots of your own tracks on Cosmic Awakenings, and we wanted to ask if you consider yourself to be more of a DJ or producer?

I like to release my own tracks on Cosmic Awakenings, as it’s sometimes hard for me to find good record labels that can offer more than I can provide via my own imprint.

Cosmic Awakenings has kept a signature sound since its beginning and that has helped the label build a large international following. Also, I have a lot of respect for other labels that focus on a similar sound such as Sol Selectas, Cafe de Anatolia, Bar 25, Kindisch and Iboga Records.

I consider myself an “Ambient Creator”, but with sounds that make people want to dance and reach a state of trance, and the beat is a gentle flow rather than an aggressive thump.

When it comes to playing DJ sets, I enjoy the feeling of generating energy and getting a room full of people dancing in unison. In the studio, I find making music a meditative process, where new tracks often come to me from inspirations I receive while playing a DJ set in front of people. So, for me, the process of DJing comes equal to producing music, as the two are so closely linked.

WWD: Have you ever released your music on other people’s record labels, and what’s coming up in your own schedule, any gigs or releases you are hyped for?

I have already released on Leveldva, Sol Selectas, Iboga Records, LNDKHN, Kindisch and collaborated on a track with Israel Vich that was released by Bar25.

I have an upcoming EP on Cafe de Anatolia that’s planned for the summer of 2023. It’s a special release, as to make the tracks I used some Sitar samples recorded on a magical trip to Varanasi in India. All my traveling gives me inspiration and fills me with the energy to share my ideas. So, I’m always excited to see what the future holds for me and my music.

WWD: We are coming to the end of 2022 so we wanted to ask what’s been your highlight of the last 12 months, and what you are most excited about in 2023?

My major highlight from 2022 was the set I played at Playa Alchemist Pyramid at Burning Man. The energy that night was another level and the festival means so much to me that I was so happy to be performing a DJ set on such a magical night.

WWD: Anything you want to add before we finish Lemurian?

When I am not touring or making music, I like to get my hands dirty and I started 2022 with the help of my team, to build “Ka’an Lemuria”, which is a physical home for Cosmic Awakenings.

It is located 20 minutes from Tulum, aside from an ancient pyramid and the beautiful nature of Muyil, which has turquoise cenotes and luxuriant vegetation.

I believe it’s time for places to bring emphasis on health through dance and being in contact with nature. This place is totally art driven, with the possibility for Cosmic Awakenings artists to stay, make music and go to gigs in Tulum.

We have focused on building a recording music studio and also a Yoga Shala for dancing events. This is a location to share insights of our cosmic perspective with everyone that wishes to visit us in Tulum.

WWD: Thanks for talking with us today Lemurian

Thanks for the interview, it was a pleasure talking with you to share my thoughts, plans and opinions. I wish everyone all the best for 2023.