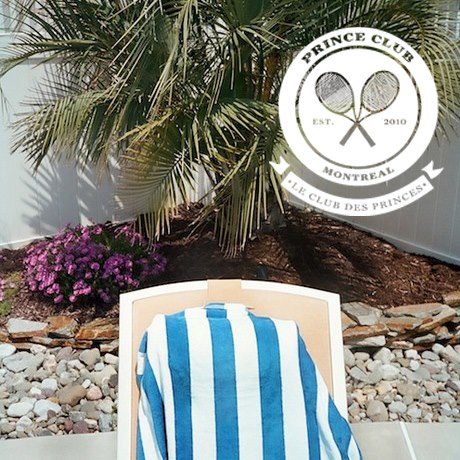 Montréal boys Prince Club have been leading the charge of up and coming House producers so far in 2013. They are very much an integral part of the next generation. After impressing with early releases on the likes of Nurvous, Play It Down and Snatch!, the duo (Zach & Max) caught the eye of one of House music biggest labels; Mark Knight’s revered Toolroom Records. Signing on there has not been they’re only success recently, however. They also won the support of house legend MK who included both “Only One” and “Before” in his first ever commercial compilation “MK In The House” on Defected Records. With the guys looking set for a huge Summer 2013, we decided a sit down was in order to find out more about their exciting rise to the fore of House music.

It’s a bit of a tradition for us to start off at the very beginning. So in keeping with that, how did you guys get involved in djing andproduction? Where did it all being and how was Prince Club born?

Z: Max and I were in a band then we moved on to electronic music which thenled to Prince Club being the sort of absolute destination of our musical brotherhood.

M: Next we know we were talking to Riva starr about signing our first EP.

Z:Couldn’t be happier putting out music regularly and being on the absolute same page musically and most of all really good friends.

You’ve been working on different continents for the last while, can youtell us about that? Have you come to a decision on a HQ for Prince Club?

Z: Max will be joining me in London, so I guess that could be looked as our Headquarters, but Montreal is still our home. I’m looking forward to being back in the studio together. We decided to live on 2 continents last year as it allowed us to cover more ground. But now with the demand, it’s become necessary that we play out as a duo; it’s also what we enjoy the most.

M: Yeah, I was in the US, and Zach was in UK, playing our shows around Europe. But my transition to join with him is only logical considering whats going on in the house music scene. Plus the Toolroom crew is here so why not come and join the madness haha.

Did Montreal provide a good base for you guys to start? Is the scenestrong there?

M: Montreal is great city/scene to live in and play as an artist. It’s like Berlin; the cost of living is low and the arts are a big part of the city. However, as you grow, you realize that relocating is necessary to continuegrowth.

Z: Yeah the scene in Montreal is eclectic so it provides the versatility, allowing you to adapt to different situations and places which is necessary while on tour in different cities/countries/venues. Montreals’ scene isreally broad, styles co-exist with each other and everybody knows everybody.

You signed your latest EP “Came Back/The Way I Feel” to Mark Knight’s illustrious Toolroom Records, how did that come about and what attracted you to the label?
M: I wanted to send demos after hearing that Mark Knight was playing some of our tracks. I started producing tracks and thought ” i can totally send them this ” so I looked up his manager, sent him the demos, and he replied saying that I should pass them to the A&R.; I did, and didn’t hear a response. So i sent a second batch of demos and, maybe 30 minutes after sending one of the a&r;’s responded saying that the label manager wanted to contact me to sign the new demos! I did a mexican party dance that day.I always thought Mark was cool because he never really followed trends; he always played ” CLUB ” music. The longevity of his career is quite impressive. He’s not some super serious deep house or techno guy he just does him and that’s what people like. Also, The guys who run Toolroom are some of the nicest people to work with and have a real passion for the music. It’s infectious.

A nice little crew is forming with other house music producers of thenext generation, the likes of Urulu, Steve Huerta, Poupon, how has thatrelationship developed?

Z: We started meeting most of them via the internet and then in person when playing in their respective cities; Poupon in Toronto, Canada and Urulu inLos Angeles, CA. Love all these guys, really.

M: We like to kid around and call it our ” DEEP HOUSE CREW”. Urulu was actually the first to post our music on the internet. He use to run a blog and asked to post our songs. The next day they got signed and we told him he had to take them down. He’s actually going be my flatmate in London. Steve i met while living in L.A last year through Urulu. I just thought he was such an awesome dude because he really looked Californian and surfed. And when I heard some of his music…WOAH! VERY talented. Poupon is like one of my brothers by now. We met at this after party and we became friends instantly. We got wasted together and now have each others backs in any situation.

Z: It’s like a small family. We are all like-minded musically and support/push each other’s releases which keeps it all very stimulating.M: The whole crew thing happened organically. In L.A the boys would come tomy house and we would work on music. Ben came to L.A met all the guys. We all keep in touch and we send music to each other all the time. it’s likeour little bones brigade it’s really cool!

Have you any ambitions to try your hand at other styles in the future?

M: I make a lot of different styles: House, Trap, Hip-hop, progressive. I love making music. I’d want to be the house music producer who also produced a pop album and also produced a Black Metal album; like Rick Rubin.

Z: As far as Prince Club production. We’ll see, it’s not something you can or should anticipate. If the right inspiration comes I don’t see why not. We like all types of music, but we like to concentrate on “floor effective” music for now. Timeless tracks is what we ultimately aim for.

span>
Is there anyone in particular you’d love to collaborate with?
M: There are a few people i’d like to find time to get in the studio with. For starters, my good friend MK, who is a legend. I’d love to also collaborate with Mr. Knight, as well as Dusky , Duke Dumont , George fitz , Huxley…this list could go on!

Z: Some of the best collaborations comes from very unexpected associations. Off the top of my head I couldn’t name anyone in particular. Would be great as well as working with any of the Dirtybird veterans, Claude VonStroke, Justin Martin, etc.

Deep House & House are becoming very popular at the moment, with HotNatured and more recently Duke Dumont entering the British Charts forexample, do you guys like the way things are going? would you have anyconcerns?
M: I don’t have any concerns because house has been through these stages before. The foundation of house music is so strong it can be distorted but never ridiculed into something maybe a bit like how Dubstep took a wrong turn.

Z: I mean it’s like fashion right? Over time, baggy jeans went out, and now skinny jeans are in. You could see it’s progression into mainstream like dubstep or electronic music as a whole. It’s so accessible and easy to dance to. It is what it is, with the “Pop Vocals” it is only logical that these track stick in your head and the cream of the crop shoot up the overall charts, Disclosure, and now Duke Dumont. Pop dance music is really what it is, it’s fine by me. It’s all music at the end; you can decide to turn it on or off.

M: it’s crazy to see white suburdan kids get into deep house but the more people into it the better in my opinion.

No doubt the next year will be a busy one! What do you guys like to do ss=”Apple-style-span” style=”border-collapse: collapse;”>when you need a break from the music?
Z: I’m into movies, and lately I started reading again and exercising; it definitely keeps me sane/a nice break from music and touring. Of course, there’s also the surging popularity of “eating out” as well haha
M: Cook! It’s the essence of life. It’s the exact same as producing a song/track. I love watching stoner-type comedies where u can just turn your brain off and laugh. Martial arts are a great way to relax as well. it’s so rare we are not doing music. If i’m not making something, Urulu or Poupon is. Or Zach is singing a new hook. There’s always music!

Finally the summer is fast approaching. What are the plans? Anypossibility we could catch you at a Toolroom night on the White Isle? Ormaybe a trip to Ireland?

M: Well I reunite with Zach in a month in London and we play AIR in Amsterdam as well as Audio in Brighton.

Z: Actually we are playing in Derby on the 27th. Really looking forward to it. Promoters seem really nice and motivated which is usually a pretty good indication.
M: True. Also, we hope to play a few shows with the rest of the ToolRoom Crew. We are honestly just super humbled to be part of something so massive like toolroom so whatever cool party we can play we will!