Back In Business! Digitalism talk to WWD [Interview] 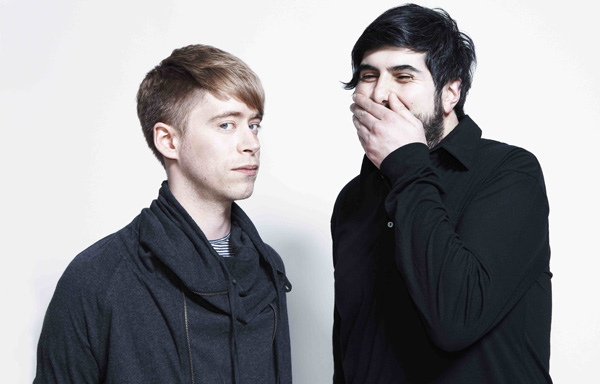 An act which really shouldn’t need any introduction. Digitalism are without doubt one of Germany’s finest exports. The Hamburg duo consisting of Jens Moelle and İsmail Tüfekçi progressed to prominence with the unique and powerful style of their debut album Idealism in 2007. With productions like Idealistic, Pogo and Zdarlight it’s easy to see how. After a tantalizing wait, the follow up finally came in 2011 in the form of I Love You Dude and although it was met by some with an air of criticism, we found it to be an enjoyable change up from works past. It was packed to the brim with bigger, fuller sounds such as Blitz and the album, for us, seemed to have been influenced by the intensity of the sensational Digitalism live show and we’re all for that here at WWD!

2013 has seen a resurgence from the guys, seeing them come back stronger than ever and with backing of Toolroom Records they’ve recently released remixes for both Bloc Party and the ever popular The Rapture. Bloc Party’s ‘Truth’ got an update from Digitalism before being released back in May. Its gradual build-up progresses into an explosion of bass induced, electro rock goodness.

The Raptures ‘Sail Away’ certainly got the full treatment in the Digitalism studio. It featured on the Digitalism DJ-KICKS mix back in 2012 and it’s safe to say we’d since been waiting for its eventual release on June 3rd. Rife with emotion stemming from the vocals, the Digitalism remix really packs a punch and is a fantastic piece of work. Simply a crowd-pleaser certain to go down a treat throughout the summer season.

Delighted to finally have them back where they belong, we had the pleasure of catching up with the boys recently. We talked about the new releases and all things Digitalism, check it out below!

We were lucky enough to catch your live show here at The Academy, Dublin in October 2011 and it certainly lived up to our expectations. What do you try to bring to your performance each time you step on stage?
We see our live show as the ultimate platform to transmit our musical world. There’s been a lot of people who said they understood our music only after they went to one of our live shows. We’ve been playing live since eight years now, and the show has evolved and changed heavily. We usually never come back with the same show, you know.


The Digitalism style is one which is extremely unique and for us your fusion of rock and dance seems like a combination of many different influences. What did you set out to achieve with your productions and who would you regard as your influences?
The reason why we started making music was because we couldn’t find enough records that were exciting us back the
n. We met in a record store where we used to work and hang out almost every day, and started performing together. After a while, going through all the weekly new releases over months and years, we were getting a bit bored because everything sounded the same to us. So we decided to make our own music so we could drop it in our DJ-sets. We started early 2000s, so naturally we wanted to do the opposite of what would be the usual output on all the other labels, so we departed from only playing house music more towards a leftfield kind of sound that included punk, electro, disco, techno, new wave and breaks. First we’d make edits of tracks and then eventually ended up making our own original music.
Heavy influences are definitely 80s video game music, soundtracks and anything that had an edge and wasn’t overproduced, like the early Daft Punk stuff as well as Wu-Tang etc.
As a duo you are extremely successful producers and this is evident from the albums packed full of quality you’ve released to wide acclaim. Do you find it easy to be creative and produce your tracks?
It’s probably easier for us than other people trying to copy us haha. We always have a lot of ideas, but we found that we cannot really produce on the road, so we wait until we’re back home in the studio with a bit of time. But by then we’re already bored of those ideas, so we’ll try to come up with new ones. It’s very annoying sometimes.
Do you find performing these tracks live harder then producing them or vice-versa?
Producing takes up more time for us, because we’re perfectionists, so we never really feel like something is finished. That’s also why we had like ten or more remixes for ‘Zdarlight’, because we thought if we cannot change the track anymore, we can still add new ideas in the remixes. And it’s the same with the live show. We always prepare special versions for the stage that will never get a release. That way we can still work on the songs. Being on stage on the other hand is fun for us, because we can let go of everything that’s on our minds, and there’s a strict curfew, like a deadline… When time’s up, it’s done.
Here at WWD we’re constantly singing the praises of the German Electronic Music scene’s strength and depth. From techno to deep house and everything in between, Germany’s got it and when you guys broke out onto the scene you brought your big sounds from Germany to the rest of the world. When we caught up with Tube & Berger recently they told us Munich man Milan Euringer was destined for big things. Who from Germany would you hold in high regard and tell our readers who to watch out for?
We’re from Hamburg, so we strongly encourage everyone to pay a lot of attention to the DIY Records crew — Solomon, Stimming, David August… Although they’re already famous.
Having had the remixes of Zdarlight out on Toolroom, was that the platform for you to put your own stamp on some tracks for the label or how did the relationship with Toolroom come about?
style=”color: #666666; font-family: Verdana, sans-serif;”>The guys from the label are really nice, and we had it in the back of our heads that we wanted to give ‘Zdarlight’ an update. It turned out to be a mutual idea in the end. Fedde, Chopstick & Johnjon and Hackman all did a great job on the remixes. They’re like future classics already.

What was it about Bloc Party’s ‘Truth’ and The Rapture’s ‘Sail Away’, that made you choose them for remixing?
They were both our favourite tracks from the albums. “Truth” sounds almost like it’s been inspired by our sound, and also the Bloc Party guys are good friends of ours, so it was a very natural thing to do this remix! As for The Rapture, again, “Sail Away” is probably our fave track on the album, and we were so excited about doing the remix that it was done within half a day. We’ve always been big fans of The Rapture.
Your remix of The Rapture’s ‘Sail Away’ dropped June 3rd and we were delighted with its release. Having first heard it on your DJ-Kicks Album we were very impressed. For many artists, being asked to compile a DJ-Kicks release is a huge honour and they take its composition very seriously. Was this the case for you guys and what did you try bring to the table with your DJ-Kicks?
Of course it was! Especially because we know the series from long time ago already, and we used to sell the vinyl versions to customers in the shop that we were working at. Coming from a DJ-background, it meant going back to the roots for us, after having released two studio albums. It was new for us, but also brought us back to where we started. For our volume, we wanted to make it the ultimate Digitalism music guide, so it represents our musical spectrum, contains some bits of our history from the last ten years, and new exclusive tracks from us. It’s meant to be really round-up.
As we mentioned at the beginning, we see the digitalism style combining elements of rock, punk and electro and we saw your rise to to the fore of dance music came in conjunction with the rise in popularity of electro music. Do you feel that shifts in mainstream music styles impacts on your productions or will you to continue as you have done in the past?
We’re not fans of formulaic electronic music that’s meant to top the charts. We appreciate the fact that Dance and Electronic has become so big, and there’s s lot of new people out there that are hungry for interesting sounds. Some of them don’t even know us because they only started listening to electronic music last year, so even though we’ve been around for a while we’d be new to them! That’s some big twist. But it’s up to them to discover what we’ve done in the past; we don’t want to repeat ourselves, so we’re always interested in new sounds in the studio. What it’s gonna be like, we never know.
The wait for I Love You Dude was excruciating after the resounding impact Idealism left behind and it’s safe to say the anticipation is building yet again with these releases on Toolroom. Can you tell us and your fans what to expect from Digitalism in the future? Album in the works? New direction? Your ambitions?
There’ll be new music coming this summer!


Exciting times ahead for Digitalism fans and with the standard of their 2013  releases to date we’r
e certainly looking forward to catching them on a return to Dublin! Grab your copies of their 2013 killer cuts over on Beatport now.