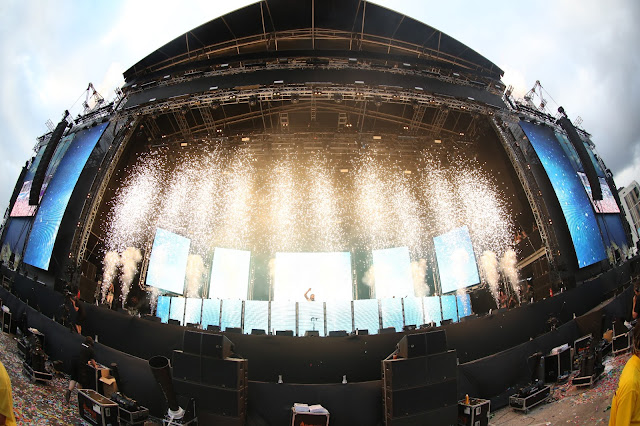 This summer has seen some interesting developments in the electronic music realm. Both Ultra music and Electric Daisy Carnival two of the biggest and brightest dance festival organisers have both made their European bows in the past two months. Ahead of EDC’s maiden European adventure many wondered whether they would be able to hit the heights of their American incarnation and there was certainly large pressure on Insomniac to prove their worth. We ourselves wondered would the brand be able to transfer over to the UK successfully baring in mind the abundance of dance festivals already in place there. With all this in mind we stepped off the train in Stratford with an open mind eager to enjoy the famous EDC experience and ready to investigate just how this brand has developed such an iconic position in the industry today.

As the early morning clouds cleared and we made our way through the Stratford station we were instantly greeted by a swarm of neon rave gear wearing dance fanatics. The beads, the glow sticks, the Borat swimsuits, they were all out in force affirming that the EDC London attendees had no intention of being outdone by their American counterparts. Despite the fact that Deep house and bass music seems to be riding high in the UK right there seemed to be a large appetite for mainroom icons like Alesso, Tiesto and Avicii. 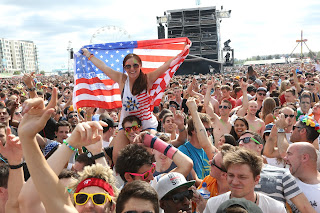 We arrived at the mainstage and were greeted by the twin delights of Nervo. It was an early start for them (they kicked off just after 2pm) but they still managed to amass a sizable crowd eager to catch a glimpse at one of the most talented pairs in dance music right now. The anthems were out in full force. Their collab alongside Nicky Romero ‘Like Home’ went down a storm while the lesser appreciated but no less effective ‘Something To Believe In’ also enjoyed a warm reception. One of the early highlights of the day and a sign of good things to come.

Following our first mainstage foray we decided a little exploration was in order. The vast expanse of the Queen Elizabeth Olympic park was the perfect terrain for the adult playground that was EDC. All the stages seemed within reach without ever being clustered. There was a also a healthy spread of talent throughout the festival with the Neon Garden and Cosmic Meadow stages both hosting top lineups as well as the Basspod which housed the likes of Nero and Sub Focus. Danny Avila and Deniz Koyu were one of the earlier treats on offer, their high tempo productions complimenting each other perfectly and despite the fact most people were just getting into the swing of things they garnered a fine reception for their set. Early on we also found time to catch a little bit of local hero Idriss Elba (Stringer Bell from The Wire) smashing it out in the Cosmic Meadow. He was working up quite a sweat keeping a sizable crowd entertained with his favoured electro stompers.
After that it was back to the mainstage for young gun Alesso. It’s been a longstanding goal of mine to catch this prodigy in action and I wasn’t disappointed. He effortlessly glided through the tracks keeping energy levels high and showing just why he’s seen as the golden boy by so many. At this stage the crowd had reached a formidable size and I sensed we were near to that 50,000 capacity. My anticipation levels were also rising for the arrival of one Steve Angello. 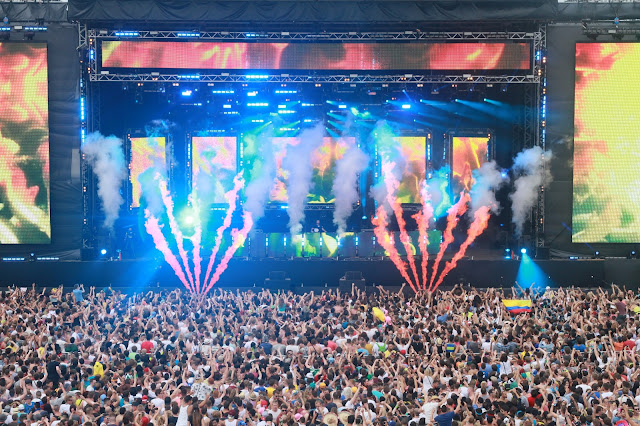 He’s made no secret that he’s a little tired of the mainroom sound right now and has been edging towards something a little bit heavier of late. Saturday proved he’s willing to back up his words. Yes there were a few SHM classics (particularly towards the end) but by and large Angello kept this one on the heavier side of mainroom and even went a little techy at one stage. One of my favourite sets of the day and something that bit different from what we had seen. Key tracks included his new collab SLVR with Matisse & Sakho as well as little throwback in Tommy Trash – The End.

Following Angello it was time for a venture to the other side of the world and in fact, on arrival it did indeed feel like we were a million miles from what had gone down at the mainstage. The darkness had descended and both the Neon Garden and the Cosmic Meadow stages had taken on a distinctly clubby feel, a sweaty pulsating vibe running through both tents. There was an unbelievable atmosphere in the Neon Garden as Dirty South delivered one of the days most memorable sets. His productions have an intense driving energy that is sometimes lacking from today’s upcoming producers. Thumping p
rogressive drops interceded with some of his own vocal anthems including ‘Alive’ and ‘Walking Alone’ meant that the Australian’s set provided the perfect kick to the next level for an increasingly frenetic crowd.
If Dirty South provided the spark it was Dimitri Vegas and Like Mike who brought the petrol can and lit up the Neon Garden. The duo seem to be like marmite. I don’t think I can pinpoint a more divisive act than the Belgian duo. Everybody has an opinion on them whether good or bad. On Saturday they were at their effervescent best. Like Mike is without doubt one of the finest MC’s out there. This is a man who managed to work the crowd into such a frenzy he was able to walk on their hands out into the middle of the crowd all the while maintaining his composure on the mic. When the aptly named Madness was finally unleashed the entire crowd seemed to lose all remaining composure (WWD included!).

Although a large part of the crowd closed their session with the double whammy that was Avicii followed by Tiesto over at the man stage WWD decided to close off our night in the Cosmic Meadow tent with Madeon. Having heard just about every mainroom track in existence throughout the day it was refreshing to have something a little different from the petit Frenchman. The usual mashups were there along with a keen appreciation for the fact that people were craving something different as we neared the end of festivities  The youngster didn’t disappoint reefing through more tracks that I could keep up with while still managing to maintain the energy of his set. 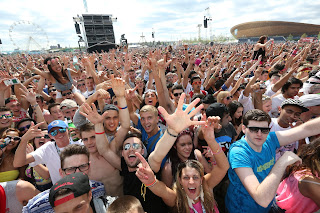 On the whole our first EDC experience would have to be classified a success (although perhaps some comparison work will have to be done with the Las Vegas version next summer!). We wouldn’t bet against this being the first of many shows in the UK. Not quite sure how a potential weekender could be accommodated at the present site but doubtless the Insomniacs will be already exploring their options. Either way a successful venture for the EDC brand and a reminder for us Europeans that despite our rich dance culture there’s always a few things we can learn from our American friends.